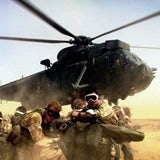 The Royal Navy is reviewing its estimated &£10m advertising business out of Rainey Kelly Campbell Roalfe/Y&amp;R after almost two decades. The pitch comes as the Directorate of Naval Recruiting begins a drive to attract young recruits.

The incumbent, which has held the business since 1988, will repitch. Media planning and buying is handled by Mediaedge:CIA.

The COI has confirmed that the Royal Navy has shortlisted communications planning and creative agencies to develop a new campaign. Besides the incumbents the pitch will include Carat and WCRS; Naked and Clemmow Hornby Inge, as well as DFGW and Universal McCann.

The campaign will target 16- to 24-year-olds to raise awareness of the range of careers in the Royal Navy and encourage them to request further information by phone or e-mail.

It is thought that the work will include cinema and press activity and concentrate on men’s lifestyle magazines such as Loaded and Maxim.

Commodore Jim Patrick of Navel Recruiting says: “In an increasingly competitive recruiting environment, the Royal Navy is looking to develop an integrated recruitment initiative that will ensure we grab the attention of the best young people in the country.”

The Royal Navy is thought to take in about 5,000 recruits every year.

Last year it launched an online recruitment campaign designed to show that there is more to a job in the Navy than being a sailor. The campaign was created by Glue London.

In one execution, viewers were asked to use their keyboards to land a helicopter in heavy rain; in another they use their mouse to land a jet on an aircraft carrier in high winds.