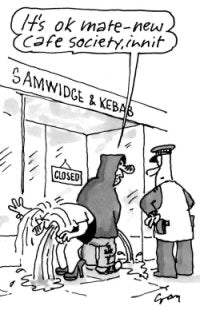 Whenever this column has clambered into the pulpit it has usually been to declaim our God-given right to go to the devil in ways of our own choosing, free from the care and protection of those growing legions who would force us to be good.

It will be the task of future social historians to determine when do-gooders became be-gooders, but I would be surprised if the graph of their ascent did not closely mirror that of state welfarism.

When social work was voluntary, its practitioners – though occasionally bossy in a bustling, businesslike way – were not given to prescribing codes of behaviour in the authoritarian, de haut en bas fashion that is now routine among members of the burgeoning “caring” industry.

Doctors are among the worst offenders. In the days before they were state employees and became infected by the plague bacillus of nannyism, they were a forgiving, kindly lot, ever mindful of human frailty and tolerant of its consequences. In those days a problem drinker was one who consumed more than his doctor.

But then came a new breed of gimlet-eyed, young martinets with a self-ordained mission to make the nation healthy whether it liked it or not. Their methods were hectoring and, in so far as they resorted to scare tactics and bogus science, unscrupulous.

Speaking for myself, I particularly resented the purse-lipped strictures regarding drink and, to be honest, I had an interest to declare. Not that I was in the pay of the alcohol industry, rather that I was its loyal and devoted customer. I was firmly of the view (and still am) that the English pub was among our most glorious contributions to civilisation. A haven of warmth, solace and companionship, it has no equal anywhere in the world. And when you add the incomparable pleasure of a pint of English bitter at its best, you may be forgiven for thinking that Paradise has nothing on this.

Or rather had. The eulogy must now be read in the past tense. In fact, it has become an elegy. With very few exceptions, the English pub has become extinct, gone the way of haywains, village blacksmiths, bicycling policemen, and the girl next door. I suppose it was a miracle it lasted so long.

It belonged to a different England, a land conscious of its history, customs and traditions, suspicious of change for change’s sake, reluctant to move with the times. Reprehensible, of course, but also perhaps the reason the pub lasted so long and was so loved, despite the best efforts of the brewers, vandals to a man, who were determined to modernise it out of existence. To their shame they eventually succeeded.

Today what passes for a pub is a blend of American-style bar, amusement arcade, disco and downtown eaterie. And the girl next door? She just passed out in the gutter, having effed and blinded her way through half a dozen alcopops and a couple of large brandies. She’ll be cleaned up by the ambulance crew – and her puke by someone else.

All of which leads me to clamber back into the pulpit, this time as a sorrowful apostate. I have seen the error of my ways, and I repent. When I read that Professor Ian Gilmore, president of the Royal College of Physicians, had called for a swingeing increase in tax on alcohol, I thought, yes, bring it on, whack it up, make it abominably expensive, hit them in their pockets, the binge-drinking chavs, the hooray Henries, and the ghastly drinks companies too.

High taxation can be an instrument of social change, particularly where alcohol is concerned. After all, we have been here before. In the 1730s, the era of Hogarth’s Gin Lane, when the government encouraged the drinking of cheap gin (distilling consumed corn and hence was good for the landed interest), the burials in London were twice as many as the baptisms. Gin was a real killer. Then in 1751, Parliament acted; spirits were highly taxed and almost immediately the scourge fell from the land like a coat. It was a turning point in social history, and recognised as such at the time.

The parallels with the present are almost too obvious to draw. A government which, to favour an interest, this time tourism, encourages incontinent drinking; a limitless supply of cheap booze; a native population with a brutish attitude to drink; an alcohol industry with the social awareness of a psychopath; and the descent of all concerned into the maelstrom.

Welcome to the British version of what culture secretary Tessa Jowell calls “the café society”. It’s similar to the continental version, but with added blood and vomit. Time it was taxed out of existence.

Procter & Gamble (P&G), the household goods and toiletries giant, is seeking to extend its share of the electrical shaver market with the launch of a major product under its Braun brand.

Publicis, the UK’s fourth-biggest advertising agency, has suffered a triple blow in recent months with the losses of the Asda, Post Office and MFI accounts. These three losses – with a combined spend of some £90m – wipe out nearly one-third of the agency’s £283m billings and threaten to catapult it from the list of […]