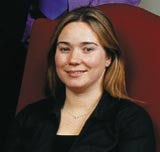 The appointment sees her reunited with her former boss Paul Geddes, who is retail marketing and strategy managing director, overseeing both the Royal Bank of Scotland and NatWest brands. Geddes was marketing director at Argos before his appointment to RBS in January this year (MW January 15).

Page has been on maternity leave since January and was tipped for the top job of Argos marketing director. But Argos managing director Sara Weller, who started last month, chose instead to appoint former Safeway marketing director Karen Bray to the role on an interim basis (MW July 8). Argos has begun the search to recruit a replacement.

Before joining Argos, Page was head of national communications at rival high street bank Abbey. She will work alongside Royal Bank of Scotland head of brand Ian Stuttard. She replaces Paulette Rowe who moved to a non-marketing role overseeing direct sales two months ago.

While at Argos, Page and Geddes oversaw the shift of advertising from Ogilvy &amp; Mather to Euro RSCG London.

George Pitcher (MW July 22) misses the point. Perhaps it is not quite the same as Middle England, but Middle-aged England certainly does exist. There are 20 million people in the UK aged 50 and over, with plenty of money to spend between them – and if 52 per cent of them are women, this […]

Coors Brewers is investing £14m to support the relaunch of Grolsch premium lager. The relaunch will include new packaging, a television, press and outdoor campaign, and also ‘Summerset’ music events in London and Bristol.

Price reductions on premium lagers such as Kronenbourg and Stella are increasing sales, but may be doing irreversible long-term damage to the ‘aspirational’ status of the brands. By Lucy Barrett