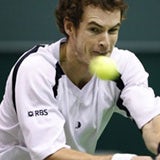 The value of the deal is undisclosed but it is thought to be an improvement on the £2m-a-year deal struck in 2009.

As part of the agreement, the world number four will appear, alongside brother Jamie and mum Judy, in a series of nationwide roadshows to promote parental involvement in sporting activity.

The community engagement approach marks a shift in sponsorship strategy for the banking group.

RBS was widely criticised in the immediate aftermath of its £20bn 2008 bailout for the reported £200m sanctioned annually by previous boss Sir Fred Goodwin.

The banking group has since cut its sponsorship outlay, including involvement in Formula 1, and has refocused its backing of tournaments such as the Six Nations on developing community clubs.