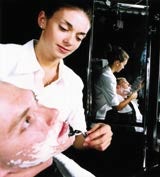 Since photographs of David Beckham dressed in a sarong were splashed across the nationals in 1998, the feminisation of men has been the subject of much debate. The increasing popularity of male grooming products and the rise in men’s interest in fashion have served to support the attitude that the traditional values of masculinity are changing. However, new research shows that not all men are comfortable with these changes.

A survey by research company Link Consumer Strategies asked men from a variety of backgrounds and age groups about their attitudes on the issue of feminisation. It found that men can be split broadly into four groups distinguished by their attitudes, use of clothing and toiletries, and ultimately their desire to fit in or stand out from the crowd.

The Traditional and Lad groups are most concerned with fitting in with the crowd and are driven by the need to feel comfortable in public and not self-conscious. This need seems to centre around concerns over their physical appearance. Men in the latter two groups, Professional and Salon, are happy to stand out of the crowd and deliberately want to give a specific impression. This helps to boost their confidence and, in their mind, creates opportunities for them.

All the men are aware of the feminisation issue and are concerned about it on several levels. The respondents are concerned about appearing feminine in their behaviour, particularly Traditional and Lad Men, who are keen to protect the stereotypical masculine values of purported disregard for appearance and body care.

But that said, all the men surveyed claim they wash more often than their parents did in the past or than they did when they were younger. However, they do not perceive the use of associated products such as deodorant or moisturisers as feminine behaviour. Rather they see such products as practical solutions to specific issues, such as itchy skin, rather than about beautification.

The relaxation of the rules for what it is acceptable for men to wear means that men have a wider variety of clothing available to them. Salon and Professional Men use this to help their careers and sexual conquests. By contrast, Lad Men will only dress up at the weekend when they are going out. Unlike Salon and Professional Men, Lad Men only dress up to fit in with their friends, not to distinguish themselves.

This demonstrates the differences between the four groups of men and their attitudes to clothes and toiletries. Traditional Men consider clothes as functional items and toiletries as indulgent, whereas for Salon Men these items are necessary, but they can also be indulgent.

Indeed, a man from the Salon group is likely to customise his own clothes, have hair-waxing treatments and use cosmetics. This contrasts with a Traditional Man, who is likely to use only aftershave and lip-balm. A Professional Man believes that work is an important part of his image but he will also have manicures and use sunbeds, whereas brands are the important thing to the Lad Man, but personal style is only a means of attracting women.

The different attitudes held by the four groups of men have several implications for marketers in the fashion and personal care sectors. It is unlikely that companies will succeed in launching one product for all four groups of men, as they respond to different packaging, positioning and advertising. For example, Traditional Men are more attracted by functional packaging whereas Lad Men want something that appears to be “cool” and mainstream. Professional Men require an emphasis on the exclusivity of a product, and Salon Men want the packaging itself to be a talking point.

According to Link, the reasons for these differences can be attributed to two influencing factors: external and internal. External factors include appearance such as skin, hair and clothes, and internal factors relate to manners and how people speak.

Traditional Men tend to focus more on internal factors and prefer a “no nonsense” approach to products. Lad Men are more concerned with external factors and are keen to ensure there are no mixed sexuality messages related to the products they use. Salon Men also lean towards the external and are attracted by unusual and highly styled images. Professional Men, however, have a more balanced internal and external focus, requiring products that perform well but also look good.

The report concludes that values traditionally seen as feminine have the potential to be developed in the men’s consumer market, but that this is not to the detriment of masculine values. This suggests marketers are mistaken if they consider “metrosexuality” represents the future of product development and marketing to men.