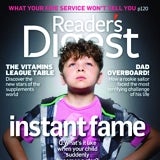 The company hopes the campaign, which starts tomorrow (9 November), will increase the circulation of the magazine by 200,000 to 600,000, with a focus on appealing to a 45-59 year old readership.

From December, the magazine will also increase in size and will also feature an A4 backing board to give it more prominence on the newsstand.

The activity comes seven months after Reader’s Digest UK was bought by private equity group Better Capital for £13m after the company went into administration due to its pension debt. A new parent company, Vivat, was created to publish the title.

Last month it appointed David Titmuss as CEO and a further three appointments to the management team.

The campaign will include sampling activity, with the November issue being distributed in tube and train stations in London, Birmingham, Manchester and Leeds.

Titmuss says the sampling activity is “designed to ensure that the magazine reaches as many of our target audience as possible.”

Sampling will account for 15% of the magazine’s July-December circulation and has been verified to comply with ABC regulations.

Gill Hudson, editor-in-chief of Reader’s Digest, says: “This really is a watershed moment for Reader’s Digest. We have been working hard to evolve the magazine over recent months to ensure that it is as engaging and relevant to our target audience as it possibly can be.”