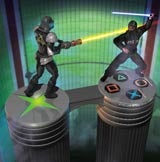 Two giants of the console world are shaping up for a ferocious battle that would be more suited to one of their games. On one side is Sony, the undisputed champion; on the other is Microsoft, the spirited challenger.

Sony spent four years and &£1bn developing the PS3, which runs at ten times the speed of most home computers. Users can access the internet through a wireless connection and, as well as featuring cinema-quality graphics, the PS3 plays DVDs and CDs.

The Xbox 360 also allows users to watch films, listen to music, view photos and access the internet. Its online links are particularly strong and include services for buying game content and music.

Microsoft has also invested heavily in its subscription service, Xbox Live, which allows players to chat with each other online.Both machines have wireless Bluetooth controllers and are “backwards compatible” – they can play games made for previous versions of the consoles. Revolution also has wireless controllers and is backwards compatible, but it cannot play DVDs without aseparate attachment.

The Xbox 360 will be launched in North America, Europe and Japan in time for Christmas, something many experts believe gives it a significant advantage. Sony will launch the PS3 next spring, but the company insists it will be worth the wait for consumers, boasting that the PS3 has twice the processing speed of the Xbox 360.

The PS3 features the new Cell processor, created with Toshiba and IBM, and is 35 times as fast as the PS2. This power means individual blades of grass on a football pitch can flutter in the wind and a character’s surroundings can be reflected in his or her (or its) eyes.

An Xbox spokeswoman says: “We find it interesting that Sony is talking about getting much more performance out of its hardware. The Xbox 360 is built to let developers build games the way they want to build them, without restriction.” 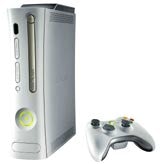 PS2 has dominated the games console market since its launch in 2001. It sold 1.3 million units in the UK last year, according to Screen Digest. This put it well ahead of Microsoft, which sold 640,000 Xboxes, and Nintendo, which sold 250,000 GameCubes.

Nintendo, the company behind the Game Boy, is traditionally strong inhandhelds. It sprang a surprise by launching an addition to the Game Boy family, the Game Boy Micro, at E3. The machine, which will be available by Christmas, features Nintendo’s brightest screen to date.

Interbrand chief operating officer John Allert thinks there is room in the market for all three console manufacturers, at least in the short term, because they target slightly different groups.

But he adds: “Nintendo may potentially devolve into handhelds, the area in which it has the most credibility and heritage.”The PS3 might have the most computing power of the three new consoles, but there are fears its launch could be delayed. Sony wants to use Blu-Ray disc technology, which stores considerably more data than regular DVDs, but specifications have yet to be agreed with Toshiba, which had intended to produce its own version.

Another potential problem for Sony, according to some observers, is that the PS3’s revolutionary graphics could be wasted on ordinary television screens. In order to experience the true intricacy of the detail, consumers would need an expensive high-definition plasma screen TV. The gap between the images produced by the PS3 and the Xbox 360 is likely tobe less noticeable on a standard screen.

Revolution has far less computing power than the PS3 or the Xbox 360, but Nintendo UK head of marketing Dawn Paine says the online library of classic games is its unique selling point.

“We don’t get too hung up on processing power or the technological aspects,” she says. “Our key focus is innovative gameplay.”Paine also claims that Nintendo’s internet gaming capabilities will be the easiest to use, adding that the company wants to persuade more casual gamers to play online.

Microsoft’s launch of the Xbox 360 was a reminder of the corporations immense marketing power. It unveiled the console on MTV, rather than at E3, and has been stressing its advantages in software and online services. it is also emphasising the fact that the Xbox 360 will be the first of three consoles to be available in North America, Europe and Japan.

Many observers believe that the PS3’s superior graphics will give it the edge, but Screen Digest analyst Nick Parker says it is too early to say which console will emerge victorious.”Arguably, the Xbox was ‘better’ than the PS2 but that didn’t guarantee it a greater market share,” he says, pointing to the perception that Microsoft’s console had superior graphics and better technology. “It is best not to get bogged down with technical specifications at this stage. The catalogue of games will determine the consoles’ success,” he adds.

While Nintendo has carved out a niche for itself with its retro games library, and the sleek Xbox 360 is a major improvement on its predecessor, the title of Console King is still Sony’s to lose. The PS3’s high-definition graphics should ensure that its dominance continues and some experts think Microsoft will return with a third Xbox before long, in order to close the gap.

However, it is vital for Sony that problems with Blu-Ray do not delay the PS3’s launch, because Microsoft will be waiting to take advantage. Whatever happens, it looks like this battle of the console giants will be a fascinating fight.

Camelot doubts that government plans to give the public more say in where the lottery money for good causes goes will improve ticket sales. Phil Smith, Camelot’s commercial and operations director, says: “Good causes per se do not tend to drive sales up, but controversial causes can drive sales down,” he says. A new National […]

Hollywood folklore contains many tales of stars who make bizarre demands when making a film or putting in a personal appearance. Most of them seem to involve Mariah Carey. But one particular star, who was due to attend the grand opening of a bar in Carlisle, takes the biscuit. The diva’s representatives have insisted that […]