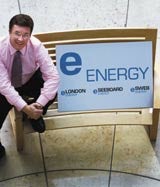 EDF Energy, which owns London Energy, SWEB Energy and Seeboard Energy brands, has become the latest company to sign up to the Nectar loyalty programme, in an attempt to promote customer retention among its 5 million customer accounts.

The move follows the rebranding of London Electricity Group as EDF Energy this summer (MW March 13).

The utility company, which has never had a customer loyalty programme or an affinity deal, is planning an ad campaign next year to support its partnership with Nectar. Maher Bird, which was recently appointed to handle the advertising account for the company, will create the campaign.

The chief operating officer for customer brands Derek Lickorish says: “The rewards given to the customers will be structured in such a way that they will not encourage energy consumption, but instead reward those who pay promptly or by direct debit or those who become duel fuel customers.”

EDF Energy’s customers will be able to start collecting points on December 1. The company is owned by the French utility giant Electricité de France.

WAA has created the £2m launch campaign for airline Duo, to be launched on November 1. The regional TV, radio, press and outdoor campaign has the strapline ‘From November 1, the world will be a nicer place’.

O2 has launched a new mobile video service in the UK that enables customers to download or stream video content over its existing mobile data network. The service is free until the end of January.