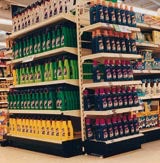 A stroll down the household goods aisle in any supermarket reveals a bewildering array of brands and products covering the cleaning of everything from toilets and ovens to windows and plugs.

However, a closer look shows that while the choice of product is extensive, the choice of manufacturer is not. Dominating the handful of manufacturer names is Lever Fabergé. But fighting for second place is SC Johnson and Reckitt Benckiser, which together are responsible for more than ten leading brands and their countless extensions in the household cleaning market.

Like Procter &amp; Gamble (P&G) and Unilever in detergents, SC Johnson and Reckitt Benckiser have engaged in a decades-old marketing battle in household cleaning, matching brand-for-brand across the range of sub-sectors.

Reckitt Benckiser is hoping the launch of Cillit Bang will tip the balance of power as, according to Mintel, it and SC Johnson are neck-and-neck in the &£718m overall household cleaners market, with a 13 per cent share each for the 12 months to May 2004.

The two are marginally stronger than P&G, with just 12 per cent despite its leading multi-purpose cleaner Flash, although Lever Fabergé accounts for a market-leading 22 per cent, thanks to brands such as Cif and Domestos. Jeyes holds a seven per cent share.

The parallels between Reckitt Benckiser and SC Johnson do not stop at market shares. Both companies were set up more than 100 years ago and both have grown enormously through a series of acquisitions and mergers to compete in more than 100 countries.

Reckitt Benckiser is the larger of the two, formed through the merger of Reckitt &amp; Colman and Benckiser in 1999, and generating sales of &£3.6bn in 2003 to SC Johnson’s &£2.9bn.

It also spends more on advertising. Including air care products, the UK-based company spent &£25m in the 12 months ending March 2004, according to ACNielsen, while SC Johnson spent &£13m.

Advertising spend aside, one source adds that the difference between the two at a consumer retail level is negligible. “They meet like-for-like in most categories with similar products supported by similar ads. For all the millions of pounds they pour into the development of formulae and fragrances, cleaners only make surfaces so clean.”

However, according to the source, the two companies need to engage in this innovation one-upmanship just to compete. “Consumers aren’t necessarily brand loyal and will migrate to new products,” she says. “If Toilet Duck stands still, then people will pick up the latest Harpic launch.”

But the launch of Cillit Bang, says a retail source, is not necessarily destined for success. While the problem of its strange name – pronounced “sil-it bang”, rather than “kill-it bang” – may be overcome by the &£5m television campaign scheduled for October, launching a brand into a market dominated by a few, well-established competitors will be difficult.

Indeed, even Reckitt Benckiser has admitted that brand launches are risky in the fast-moving consumer goods sector and has declared itself focused on growth through acquisition.

But one source says Reckitt Benckiser, which has so far relied on Dettol in the surface cleaning market, needs to risk the new launch to compete with Flash and Mr Muscle, and adds that it is a surprise that the company waited so long, given the lemming-like tendency in the cleaning market to follow prevailing trends.

For example, when Reckitt Benckiser lined up the launch of an innovative toilet brush under Harpic called Ready Brush this summer, there was little surprise SC Johnson had its own next-generation toilet brush ready to roll under Toilet Duck (MW February 19).

Both products were backed by multi-million pound ad campaigns showing the products to be the latest and best brushes on the market. Advertising in the cleaning market is still based on the demonstration of these innovations, according to Wieden &amp; Kennedy managing director Neil Christie, who worked with Reckitt Benckiser as well as rival Orange Glo while marketing director at Euro RSCG.

He says he will be surprised if Cillit Bang takes a different approach: “Household goods marketing is very unsophisticated. These companies are manufacturing based and the role of advertising is to demonstrate the effectiveness of new products, as clearly as possible.”

Brand values, Christie adds, are added almost as an afterthought to achieve a consistency across campaigns. Indeed, another agency source says there are three basic types of advertising, although the common thread in all is functional demonstration.

“There’s the ‘cleaning is a hassle’ approach of Mr Muscle, the ‘miraculous results’ of Flash, and the guilty ‘you will be a bad mum unless you keep your house clean with this’ approach of Harpic.”

He adds: “There’s a real lack of differentiation in the market with many brands communicating the same functional message.”

But, he says, companies are trying to find a point of difference through innovation and specialist products. He points to products such as P&G’s Flash Mark and Stain Eraser, which launched last month (MW April 22).

A retail source agrees there will be more focus on specific niche products for different areas of the house. The source adds that Cillit Bang will be initially tested in its general-purpose form, but is likely to be extended heavily to cover a range of categories.

The areas of strongest growth are already in niche areas such as wipes, and new versions of classic products, as witnessed by recent duster launches under Pledge and Flash. The coming year is also likely to see a return of value to the market, she says. “With trigger cleaners under &£1.50, companies will look to bring back the value.”

She points to the likelihood of a “next generation” of cleaners that will offer “ultra hard cleaning”, as well as innovations in fragrance, including the introduction of fragrance-containing “balls”, which are already available in Europe.

Although unlikely to challenge P&G’s Flash brand, which benefits from the highest ad spend in the market (&£7.6m, according Nielsen Media Research), or Lever Fabergé’s overall market share, SC Johnson and Reckitt Benckiser will continue to push out innovations at a rapid rate to try to claim the second spot in the household cleaner market.

But whether consumers can see any real difference in these technological changes is another matter. Perhaps Reckitt Benckiser hopes the distinctive name of its latest innovation will be different enough to catch the public’s imagination, however they say it.