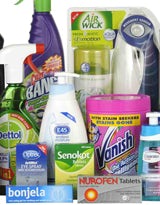 The group, which also makes Finish dishwasher products and Vanish stain remover, posted a 14% rise in fourth-quarter net profit to £448m,and says its expects to see good growth in 2010.

Bart Becht, the firm’s chief executive, said 2009 was “a very good year and based on the current outlook, we are confident of achieving continued good growth in 2010.”

Becht said it would be inappropriate to declare group targets for the drug but estimates the business should have 10% growth in operating profits.

Reckitt Benckiser recently announced it is to integrate its household/personal care and healthcare businesses to bring the UK business in line with RB in other markets, where it already operates as a single business unit.

It says by integrating the business, it will become one of the UK’s leading FMCG companies and one of the market’s major advertisers.

The Yellow Pages directories will be reduced in size this summer in an effort to stay well established in consumers’ minds and encourage advertisers.

Unilever has reappointed Mindshare to handle its media planning and buying account in Western Europe, North America and Canada.