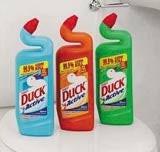 SC Johnson claims that Oust is an “air sanitiser” that kills odor-causing bacteria in the air without leaving a lingering fragrance. It says that, unlike other surface-spray or air-freshening products, it does not simply mask the smell. The range will be available in several different scents.

The aerosol-based range is already a successful brand for SC Johnson in its domestic US market. The company also sells the Glade range of air-freshening products, although these do not use the same “air sanitising” formula.

Industry sources say the range will be launched at the end of the year and will be supported by a multimillion-pound ad campaign.

Banks Hoggins O’Shea/FCB handles advertising for the company. Zenith Optimedia is still responsible for media buying and planning, although SC Johnson’s £200m global account is being reviewed. A decision on the review is expected soon.

The Oust launch will be overseen by Derwyn Cafferkey, who was appointed marketing director following the resignation of Claire Broomfield after just one year in the job (MW August 21, 2003).

Cafferkey has launched several air care products over the last year, including the Glade 3-in-1 candle and Glade Decorative Scents (MW August 28, 2003).