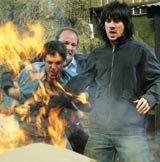 Reckitt-Benckiser is to sponsor ITV soap Emmerdale in a 12-month deal thought to be worth £10m.

It is understood that RB will use the sponsorship to showcase a number of its brands on a rotational basis. Its portfolio includes Mr Sheen, Finish, Dettol and Lemsip, but which brands will be featured remains a closely guarded secret.

Gary Knight, head of sponsorship and branded content at ITV Sales, says: “The partnership with Reckitt Benckiser will be activated across the communications platform.”

The deal includes broadcast sponsorship of all episodes of Emmerdale on ITV1, ITV2, ITV3, online, licensing and off-air promotions. It will also provide interactive television applications for the first time. It is thought that digital viewers will be able to click on a red button during the soap and sponsorship idents to access information on the show, characters and plot lines.

Joanna Kay, media controller at Reckitt Beckiser, northern Europe, says: “That we are able to take a deal as big as Emmerdale reflects the growing strength of Reckitt Beckiser as an advertiser in the UK.”

The soap is watched by an average audience of 10 million people six times a week. ITV executives are hoping that the programme, which was floundering a decade ago, may overtake EastEnders in the ratings.