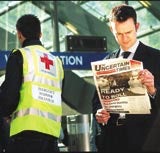 The British Red Cross has appointed DFGW to its advertising business following a four-way pitch. The business is thought to be worth about &£1m.

The appointment follows British Red Cross’s decision to revamp its brand identity and positioning, in the wake of concerns that the public perceives the charity as too heavily focused on overseas work. The agency has been tasked with developing integrated campaigns that will develop public understanding, trust and confidence in the work the charity does, both at home and overseas. The charity says that work will begin immediately on developing a new marketing strategy. The pitch was overseen by the AAR.

The British Red Cross adds that DFGW’s appointment will not affect existing relationships with its agencies, which include Catalyst, Pell &amp; Bales, Whitewater and WWAV Rapp Collins West. It uses MediaCom for its media buying and planning (MW December 16, 2004).

Despite enjoying a record year for advertising expenditure in 2004, cinema still has a number of important issues to address before it convinces advertisers of its worth. By Branwell Johnson

Expedia, the online travel company, is on the hunt for an advertising agency to handle its &£12m business after parting company with Clemmow Hornby Inge.

Unilever is expected to strip profit responsibilities from its most senior marketers, Simon Clift and Anthonie Stal, in a wide-ranging shake-up of the organisation as part of its “simplification” strategy. The new-look structure, announced last week by incoming chief executive Patrick Cescau, scraps Unilever’s two separate divisions, health and personal care (HPC) and food. These […]