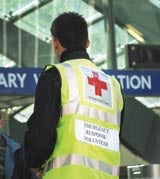 The British Red Cross is looking for an advertising agency for a large project next year.

The appointment is being overseen by director of communications Phil Talbot and handled by the AAR. A decision is expected early next year.

The brief is to develop a marketing strategy, above-the-line advertising and media-neutral planning for the undisclosed project in the new year.

The charity claims the appointment will not affect existing relationships with its agencies, which include Catalyst, Pell &amp; Bales, Whitewater and WWAV Rapp Collins West. It uses MediaCom for its media buying and planning.

Earlier this year, the charity ran a campaign featuring its beneficiaries using the strapline of “I owe my life”.

Separately, the International Committee of the Red Cross, the parent organisation for the British Red Cross, is looking for an advertising agency to run a campaign highlighting the human rights abuses being committed as part of the global war on terrorism.