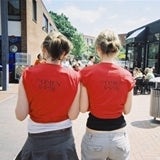 Redbus Outdoor is expanding its on-campus media network to include experiential offerings and sampling. The Xperience launch will coincide with the start of the new university year next month.

The company is hoping to offer advertisers that are seeking to target students a “one-stop shop” for campus-based marketing. Up until now, its student-focused activity has been limited to a network of six-sheet posters, known as Xsites, which cover 84 campuses.

The new arm will offer leafleting, sampling, branded door hangers, beer mats, pint glasses and stunts. It will be run by Paul Carr, managing director of Xsites, and will be available across the whole Xsites network, offering advertisers a potential reach of more than 1.3 million students.

A Redbus Outdoor spokeswoman says the move has been driven by strong demand from advertisers wanting to target students. Earlier this year, it added Bluetooth capability to many

of its Xsites posters and claims it has booked its entire Xsites network for the forthcoming start of the university year.

The company ran a pilot experiential campaign in May for a remake of the film The Omen, by Twentieth Century Fox. A promotional team visited a number of university campuses across the country where they handed out fake tattoos reading “666” to students.