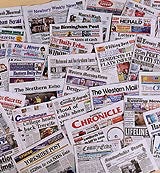 The scramble for the last remaining major regional independent newspaper group, Regional Independent Media, could be a prelude to a new style of consolidation.

Instead of large-scale acquisitions of regional newspapers, some industry figures believe that publishers will start swapping titles that don’t sit naturally within their existing portfolios.

The main players bidding for the fifth largest regional newspaper publisher RIM – Gannett through UK subsidiary Newsquest, Guardian Media Group and Johnston Press – have carved out a strategy to split up the group among themselves.

The Competition Commission gave clearance last Wednesday for all three to bid. RIM’s titles are in the south-east of Scotland, north-west England and Yorkshire.

But chief executive Chris Oakley issued a statement to staff on Thursday saying: “The RIM board has decided that it will not deal with the proposed consortium with Gannett as its representative and our advisers have informed Gannett of this decision.”

Candover, the private equity group which has a key 50 per cent stake in RIM, approved the statement, which also made it clear that there are at least two other potential bidders. It is understood that they are based outside the UK.

But industry commentators are sceptical about the level of interest in RIM, which recorded a turnover of £156.3m and operating profits of £32.8m in 1999. John Fairfax Holdings, the Australian publisher of the Sydney Morning Herald, is understood to have expressed an interest in bidding for RIM.

Simon Mays-Smith, media analyst at UBS Warburg, says: “If there are other serious contenders, they will not pay as much for the papers as those already committed because they won’t be able to get synergy savings.”

Mays-Smith discounts the possibility of Axel Springer Verlag entering the market due to the cash constraints of its major shareholder, KirchGrupper.

He also thinks it unlikely that the US-based Cox Enterprises and Tribune Company would be interested, as they are more focused on television and multimedia platforms. Hollinger, owner of the Telegraph Group, has also reportedly looked at RIM.

If a sale, at the reported asking price of £700m-£750m is not made, Candover has the option of floating RIM next year.

Chris Stanley, marketing director at The Newspaper Society, says: “The RIM situation might herald a chapter of rationalisation and title-swapping in the industry.”

Stanley claims that economies of scale become much stronger if there are batches of titles in the same geographical areas rather than having a portfolio spread across the country in the manner of Newsquest, Northcliffe and Trinity Mirror.

Mays-Smith agrees that title-swapping could be next: “That’s probably what’s going to happen as we enter the final stages of consolidation with big acquisitions becoming rarer. Apart from synergy savings to be gained from acquiring new titles, there are also tax efficiencies to be had from swapping titles.”

But Tim Bowdler, chief executive of Johnston, believes there is plenty of scope for consolidation through acquisition. “There might be some swapping, but in my opinion that will not be the primary form of activity,” he says.

According to the Newspaper Society, the top 20 publishers account for 84 per cent of all regional and local newspaper titles in the UK, and 95 per cent of the total weekly audited circulation. Apart from RIM and Southnews, which is being bought by Trinity Mirror, there remain only two independent regional publishers – Eastern Counties and Midland Newspaper Association – within the top ten. These two last are family-owned and not for sale.

There has been speculation that Johnston Press, which is also in the top ten, could find itself the subject of a takeover.

Consolidation has always meant extra regulatory hoops for the newspaper industry, courtesy of the terms of the Fair Trading Act, 1973. There is an automatic reference to the Competition Commission for transfers of newspapers with circulations of more than 50,000 where the buyer’s newspapers would have an average paid-for circulation of more than 500,000.

There are also strict rules concerning ownership, the interpretation of which, say some industry commentators, is becoming more relaxed. They point to the statement by Steven Byers, secretary of state for trade and industry, issued with the Competition Commission’s report last Wednesday.

“It would be desirable,” the statement said, “for all local newspaper markets to be within easy geographical reach of at least two major publishers to enable them to use their existing infrastructure to support the launch of new titles into those markets.”

Stanley says: “The interpretation of the rules appears to be softening a little as a result of persistent lobbying by The Newspaper Society. Hopefully, the forthcoming legislation will relax the rules further.”

Relaxation of rules can only encourage further consolidation within the regional press, but whether this is through acquisition of publishing groups or by title-swapping remains to be seen.