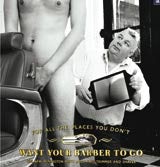 The campaign, created by Grey London, features several executions showing the alternative to using the Remington product – having to go to a barber to have unwanted body hair removed from intimate areas.

The Body Hair Trimmer was launched in the UK in January and has already become one of Remington’s top-selling lines, according to senior brand manager Michelle Simpson.

Remington claims it is the first to market such a product in the UK, disputing recent claims by Philips about its Bodygroom product, due for launch in June. Philips is backing Bodygroom with a £1m through-the-line campaign that will include advertising from DDB London using the tagline “Now you can shave wherever you want”.

The ads break this week in men’s lifestyle magazines, including FHM, Maxim and Nuts. Media buying is through MediaCom.

Simpson says: “The ads are good fun and we’ve targeted the media carefully so the tone fits.”

A year ago, Philips poached Remington managing director for global haircare Simon Bluring to be UK marketing director for its electrical home and personal care division (MW May 20, 2004).