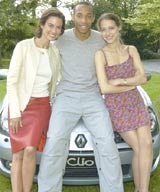 Arsenal and France footballer Thierry Henry is to be the new face of Renault in the UK, in a move calculated to make the brand’s image more masculine.

The footballer, who is tipped to be one of the stars of this year’s World Cup, will feature in a campaign for the Renault Clio, breaking this week. The ads, created by Publicis, will show Henry searching for the meaning of “Va Va Voom”, a phrase which was used in the last Clio campaign.

The Clio brand became famous in the Nineties for the “Papa and Nicole” campaign. In the last ad, Nicole had to choose between marrying comic Vic Reeves or his sidekick Bob Mortimer.

The campaign was followed by the “Size matters” campaign.

Renault UK national advertising manager Jonathan Wignall says: “This campaign is designed to show people the strong masculine side to the Clio range, which we have not focused on in the past.”

Wignall says the campaign will target a younger audience and will feature the Renaultsport 172 – a two-litre version of the Clio.