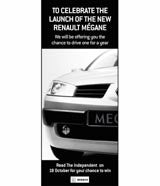 Renault has bought up all advertising space in this Friday’s edition of The Independent, to promote the launch of its Mégane model.

The deal, believed to be worth about £250,000, is a first for The Independent and was brokered by Renault media agency Carat and the newspaper’s in-house creative sales team Independent Solutions.

Renault will be the only advertiser in the main section, taking 14 mono and ten colour spaces. Several of the ads will contain a half-quote about Mégane. The quotes can be completed with the aid of a drop-out sheet in the centre of the paper.

Readers who complete the quotes will be able to enter a prize draw, with the first prize being the use of a Mégane for a year.

The Independent has previously worked with Renault to create the largest advertising space ever offered by a broadsheet – an eight-page double gatefold – in May (MW May 23).

Marketing stunts undertaken by clients and newspapers in the past include Microsoft’s tie-up with The Times in August 1995 to launch Windows 95. Microsoft paid for all advertising spaces in The Times and for the newspaper to be given away free, together with a supplement.