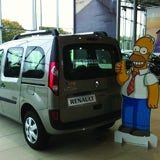 Each Simpsons branded Renault is fitted with an integrated Tom Tom sat-nav system with the voice of Homer Simpson and “The Simpsons” badge on the rear featuring the whole family.

The Simpsons Renault Kangoo will be available in Belgium, the biggest market for the model. The launch is supported by print, TV advertising and showroom displays.

The limited edition car follows a Simpsons promotion run by Renault in 2008 which featured the Homer, Marge, Lisa, Bart and Maggie Simpson and their grandfather Abe Simpson in “the ’real’ world”.

Carl Lumbard, senior vice president and managing director at Twentieth Century Fox Consumer Products, says: “Renault has really taken brand partnership to nother level. The transition from a hugely successful promotion to an actual product highlights the strength of the collaboration and a pioneering new product for both Renault and The Simpsons.”