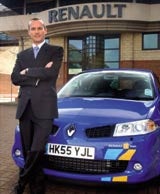 Bouvier, who reports to UK managing director Philippe Talou-Derible in his new role, joined Renault as an area operations manager in 1998 and was made manager of marketing planning for Renault UK in 2000.

He rejoins the UK business from France, where he was most recently director of the European importer division. Bouvier will lead a team of more than 50 staff as UK marketing director.

Renault has just launched the new MÃ©gane and Espace models and will unveil the new Clio Renaultsport at the Geneva Motorshow this week.

Bouvier says: “The new Clio Renaultsport is a vital model to the UK because it is the Renaultsport’s biggest market, accounting for around 50% of all sales.”