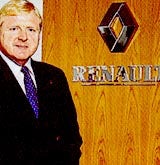 Mack, who joined Renault in 1988, has left to start his own consultancy.

The communications department, which previously incorporated advertising and promotions as well as press and public relations, has been split in two.

Danielle Perray, director of finance, has been promoted to European finance director of Renault Group. She will be replaced by Francois Le Maistre, who joins the UK operation from elsewhere within Renault Group.

Renault spends about £70m a year on advertising in the UK, with work through the CST Group, Publicis and Stretch the Horizon.