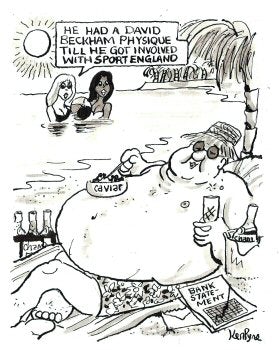 “Come, come, Murray”, I hear you cry, “Dream on, old lad, you haven’t won the Lottery yet.” But that, my friends, is where you are wrong or, to put it another way, almost right. While it is true that I am unlikely to scoop the Lotto jackpot, I shall nevertheless come by a substantial fortune in Lottery loot.

How? Well, since we have known each other for a long time I’ll let you in on the secret. Do you remember those gym masters at school? Big beefy fellows in singlets bursting with brawn but almost entirely vacant-and-to-let in the brain department? Guess where they ended up, or some of them at any rate? No, not in the chorus of Mary Poppins – no need to be facetious. Come to think of it, though, you’re not far out. A fair number of them fetched up at an outfit called Sport England. It’s one of those quangos, a quasi non-governmental waste of space filled with time-servers who would otherwise be snoozing in their armchair under a copy of The Guardian.

This particular quango of which I speak has an annual budget of £250m of Lottery lolly. Well, you know what they say about a fool and his money. I mean, how hard can it be to extract a bob or two from an outfit whose members were concussed on a hockey pitch 20 years ago and are still in a coma?There is a snag, however. Someone else got there first. A market research company called Ipsos MORI walked away with £5.5m of Sport England’s cache of jimmy o’goblins, and, you won’t believe this, all the boneheads got for the money was something already in their possession, viz the knowledge that we are a nation of irredeemable slobs.

True, Ipsos did something for its money: it interviewed some 363,000 people over 12 months, which works out at £15,000 a head. Most of the respondents must have been on holiday in places like Alice Springs and Woga Woga, which would explain the cost incurred in reaching them. And the researchers, as we shall see, travelled by bike, which explains the lengthy time involved.

When they got back, removed their cycle clips, and thumbed through their notes they discovered that exercise is to the average Briton what a pork pie is to a vegetarian. When the worthies at Sport England read this finding – vellum-bound one hopes – they declared themselves thoroughly satisfied and reached for their cheque book murmuring, “How much did you say? Five and a half million? Worth every penny. Oh, before you go, would you like one of our T-shirts and a mug?”Now perhaps you can see my plan. They say that lightning doesn’t strike twice in the same place, which is probably true with the exception of something large, wooden and dense, like a tree or Sport England.

I intend to approach this organisation disguised in a ginger wig, wearing a tattersall checked suit and, for added authenticity, carrying a clipboard. I shall suggest to them the immeasurable value of commissioning a survey into the exercise regimes of daytime television viewers and street corner loiterers.

I shall naturally require an upfront payment of, say, 500 grand, which I shall use to establish my base in the Bahamas. Once ensconced, I shall dictate my research findings to my amanuensis, the lovely Racquel.

It boasts clear and accessible recycling points on all floors of its buildings. It uses energy efficient light bulbs wherever possible. It provides bike storage and shower facilities for employees who commute to work using a bicycle. It offers all clients the opportunity to have their projects printed on recycled paper. It uses lavatory cisterns that minimise water use.

I share Ipsos MORI’s hatred of waste and yet find it in my heart to rejoice in Sport England’s contrary stance. After all, one man’s waste is another man’s fee income.

My father was the assistant editor of The Daily Record so the media was always prevalent during my upbringing. Then, by identifying a niche in the media marketing sector and combining it with my passion for football I created Match Day Media an idea formulated on the terraces of Old Trafford.

Vivid Imaginations, the toy company behind the Bratz brand in the UK, is planning an advertising blitz around Crayola as it seeks to reinvigorate the brand. Early next year, Vivid will kick off a television ad campaign, launch new products and r…

He’s run three major meida organisations, but lost out on the top job at ITV. Some see Stephen Carter’s move to Brunswick PR as merely a holding job for a ‘professional chief executive’ who clearly still has much to offer, so what does the future have in store for him? By Catherine Turner.