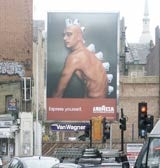 Van Wagner is taking mega billboards beyond London and claims they are far more effective than any other mix of outdoor sites, says Lucy Barrett

The old cliché: “does size matter?” is often asked by advertisers and agencies when considering outdoor as a medium for an advertising campaign.

Van Wagner, the company which introduced the notion of large, mega premium sites to the UK, has just picked up the contract to manage Network Rail’s bridge-span advertising sites after a competitive tender (MW last week).

But the look and feel of its back-lit quality sites was not the main factor that won over the company’s commercial advertising manager, Yan Huybrechts: “Most of the outdoor companies have premium sites – Van Wagner basically submitted the best tender.”

The contract will double Van Wagner’s sites to 200 and take its premium “mega site” billboards outside London for the first time. If Van Wagner is to be believed, the traditional mass coverage outdoor campaigns, often spread across 48-sheet sites, 96-sheet sites, six-sheet sites or a combination of all three, is a thing of the past.

The US-owned company claims that booking an advertising campaign using a range of outdoor sites is a waste and that the money is better spent cherry-picking a number of large format premium sites that consumers are more likely to see.

Van Wagner has been so determined to get its point across that it commissioned its own research to prove that consumers remember ads on its sites far more than on the bulk standard six, 48 and 96-sheet formats. The findings, which are predictably favourable, show that there is a disproportionately higher recall for large mega premium sites than the more numerous smaller formats.

This research, carried out independently by NFO Europe, claims that ads on mega 96-sheets, the type built by Van Wagner, have a 66 per cent recall, while a standard 48-sheet has just a four per cent recall. Perhaps most damning was six-sheet bus shelter advertising, which has only a two per cent recall, raising questions over its validity as a poster medium.

Van Wagner sales director Kevin Shute says he thinks six-sheet audience measurement, which takes into account both drivers and pedestrians, is over-generous: “Most of their audience comes from pedestrians, not from drivers.”

This is disputed by JC Decaux’s marketing director, David McEvoy, who says the industry’s measurement system, Postar, accounts for this: “Postar already calculates that just 15 per cent of people in a car will see a six-sheet and in some cases three per cent.”

Van Wagner’s rivals, Clear Channel, Maiden Outdoor and JC Decaux, may publicly say Van Wagner’s claims are incorrect, but over the past three years all three have increased their offering to include premium mega sites.

The way advertising hoardings look has also been the focus of a lot of attention in the past decade and there are now not just front-lit poster sites, but also back-lit ones.

Back-lit mega premium sites have traditionally only appeared on Cromwell Road in London, but similar quality sites have been springing up in the past few years in hundreds of locations across the UK in all the main cities.

Van Wagner’s Shute claims his company, which set up its UK offices in 1999, saw a gap in the market “The only place people bought location-specific sites was on Cromwell Road,” says Shute. “There was a mass over-supply of dubious sites.”

Shute claims Van Wagner will not build thousands of sites in order to safeguard the level of exclusivity attached to its premium sites: “Where the others have a nest of sites, we always try to build one structure that enhances visibility. We can also sell our sites individually so advertisers aren’t forced to buy a package,” he says.

According to industry experts, an illuminated site offers an advertiser an increase in audience of 42 per cent. Although more and more illuminated sites are coming to the market, there are still thousands of sites that are only visible during daylight hours, which in the winter could mean an ad would be viewed for just a few hours a day.

“Contractors have worked very hard to illuminate as many panels as they can,” says Outdoor Advertising Association operations director Bill Wilson. “But it is not possible to do this with every site, for various reasons, including obtaining planning consent.”

Clear Channel managing director Jonathan Lewis claims all sites deliver a function for advertisers and even though some sites are not illuminated, they are still delivering a large audience: “There will always be a role for these sites for advertisers who want to hit as many people as often as possible.”

Van Wagner is not the only company that believes the future of outdoor advertising is large-format. Companies such as Mega Profile and Blow Up Media have created the medium of banner advertising, where they can wrap entire buildings with a poster.

As the OAA’s Wilson says, outdoor companies have had a struggle with local government planning departments to better their offering, especially large format banner companies such as Mega Profile. Planning departments have often claimed the sites are unsightly and have ordered them to be taken down, even if they are covering scaffolding.

In response, Mega Profile also commissioned research, this time conducted by MORI last summer, which found that 60 per cent of the British public would prefer to see buildings wrapped in ads than in bare scaffolding.

So far, neither Maiden nor JC Decaux have made moves into banner advertising, but Clear Channel has just announced that it is launching into this area. From next month it will take control of the UK’s largest advertising site at Fort Dunlop, which it snatched from Mega Profile: “We believe we should be going into the banner market,” says Clear Channel’s Lewis. “But only in locations that merit banners.”

Whether or not mega premium sites are the most effective way to use outdoor media budgets, the medium is certainly increasing its grip on the market.