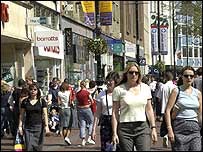 Retail sales have seen a slight improvement this month, compared to August. But the outlook for October remains bleak, according to the Confederation of British Industry (CBI).

While sales have continued to slump in September, it has gained ground compared to the falls experienced in August. A balance of -27% was a better result than the low of -46% reported in August.

Around 37% of the supermarkets surveyed have reported sales growth this month so far. However, just one-fifth of retailers reported higher sales volumes in the first half of this month, while 48% reported a decline.

The CBI survey also found that around 30% of retailers said they expected further declines next month. Sales volumes have been down over the past three months, with around 36% of retailers suffering falls.

In August, retail sales in the UK were hit by wet weather and fell by 1%, according to the British Retail Consortium. Its findings showed that retail sales fell for five consecutive months – the worst figure since 2005. Retail sales fell by 0.9% in July, compared to the same period in 2007, when they rose by 1.8%.