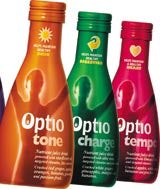 Optio Health Products’ range of nutrient juice drinks, launched to ride the wave of interest in healthier lifestyles just over two years ago, has been de-listed from major multiples and is believed to have been axed.

The Optio range was launched by an entrepreneurial team including former Cullens chairman Peter Matthews, James Rhodes and Gavin Newman, who launched the Juice-Up bar chain. The company was unavailable for comment when Marketing Week went to press.

The drinks were developed by brand consultancy Corporate Edge and rolled out in September 2002 (MW September 5, 2002). The drinks were packaged in 150ml bottles and carried the strapline “The stuff of life”. They were distributed in Cullens, Sainsbury’s, Waitrose and independent stores.

The four drinks in the range were packaged with individual icons and colour-coded caps. Each drink was promoted and named for a particular health benefit: Shield for the immune system, Tone for complexion, Tempo for the cardio-vascular system and Charge for the digestive system.

One insider says that the proposition was overly complicated and that retailers were unsure where to place the product in stores. It is believed that Optio Health Products is reviewing the formulation and packaging of the range with a view to returning to the market.