Shoppers will do anything for a deal, especially on ‘Black Friday’. It has become one of the year’s busiest days for retailers and this year takes place on 28 November. The day of discount shopping traditionally follows the Thanksgiving holiday in the US, but like most things American the phenomenon has crossed the Atlantic.

Last year, the day turned into Black Eye Friday as fights broke out in Asda. Shoppers took to Twitter to describe the violence as hundreds hunted in-store for big-ticket electrical items that had been discounted by as much as 70%. Yet Asda boasted five-fold uplifts in sales of some lines and a halo effect for other ranges.

Dixons Retail (now part of Dixons Carphone) also saw pre-festive cheer. Black Friday proved to be the third biggest promotional day of 2013 for the company, which owns PC World and Currys. “Black Friday is firmly established,” says group finance director Humphrey Singer. “It will mark the beginning of the Christmas period for us.”

On the other side of the weekend is Cyber Monday, this year falling on 1 December. The term was created by marketers in the US to encourage people to shop online. Sales on Cyber Monday 2013 were 31.6% higher than in 2012, according to IBM, and there were 115 million UK visits to online stores. The big players did particularly well, with Amazon enjoying the busiest shopping day in its history with 4.1 million individual transactions.  But there is also a trickle down to the smaller brands and retailers.

“The popularity and activity for these days increases every year,” says Sarah Hague, marketing manager at Findmeagift.com. “We see a spike in sales across these days – last year, sales increased by 20%. But even if we didn’t market these days ourselves, the larger brands’ campaigns instil a shopping vibe across UK consumers.”

Such is the interest generated around these marketing opportunities that it would be naïve for any brand to ignore them, adds Vicky Betts, marketing and trade director at fashion etailer Missguided.

What is Black Friday?

Black Friday is so named because it traditionally indicates the point at which American retailers begin to turn a profit, or go ‘into the black’. It’s also the last payday before Christmas for many. Between 7am and 8am last year, traffic on the John Lewis website was “14 times more than anything we’d seen before”, according to managing director Andy Street. This year Shop Direct has planned a week-long event and others are equally prepared.

Cyber Monday is a term manufactured by marketers for the Monday after Black Friday. It is another date originating in the US, but UK shoppers do not seem to mind. Last year, it was the busiest day for traffic on retail websites, with Tesco enjoying a 114% increase in site visits.

More than a quarter of Christmas spending is done online, according to IMRG. With Black Friday and Cyber Monday both working days in the UK, most brands will be competing for online shoppers. Purchases using smartphones or tablets almost doubled on Cyber Monday 2013, compared to the corresponding day in 2012, according to IBM.

No choice for retailers

Even those that question the retail ethos of such deep discounting see no choice but to dig deep and get involved. Annabel Kilner, country manager UK at furniture etailer Made.com, says: “It isn’t necessarily a positive thing for business that these two days have come to the UK; it should simply remind consumers that if brands are able to discount so heavily during sale periods, the mark-ups must be too high in the first place.”

She adds: “Our business concept of cutting out the middlemen enables us to keep our prices low all year round, but we recognise the importance for us to match customers’ expectations during set sale periods. Therefore, we’re offering a promotion on Black Friday and Cyber Monday for the first time. As an online retailer we will use it as a great acquisition opportunity and look forward to seeing the results of our activity.”

Last year, Experian Marketing Services recorded that one in every 550 searches in the UK on 28 November concerned Black Friday. Visits to retail websites increased 19% and 9% on Black Friday and Cyber Monday respectively compared to 2012. Experian predicts a 5% to 10% growth for both dates this year, but the busiest day could be ‘Manic Monday’. On the second Monday in December last year visits reached 120 million and could rise by up to 15% this year.

More visits and sales seem likely as shoppers go into the festive season ready to spend. Consumer confidence indicators published this month show that households are more confident than a year ago. Nielsen’s index finds estimated consumer sentiment to be at its highest since 2007, and 42% of Brits feel now is a good time to make purchases, up two points on last year and the highest level since 2006. And Mintel has forecast that UK like-for-like retail sales will rise 3% in December to £36.5bn, with 13% of that online.  This all augurs well for brands and retailers this Black Friday.

Nielsen’s index shows consumer sentiment at its highest since 2007, when MySpace was still more popular than Facebook

Jon Owen, retail brands and trading director at Shop Direct, which owns Very.co.uk and Littlewoods.com, says: “We had planned for a big day last year, but it was comfortably [Very.co.uk’s] biggest sales day ever. We did four times the orders we usually do [three orders per second] and we’re hoping for 50% more this year.”

In 2013, Very.co.uk released new deals every hour to keep the brand front of mind and this year will be spending £250,000 on advertising for the weekend; £200,000 will be spent on sister brand Littlewoods.com. Bringing another brand into the fray makes sense given last year’s success, says Owen. Shop Direct has posted a group sales increase of 3% in the 12 months to the end of June – Very.co.uk hit £700m, up 23.1%. Mobile shopping has been the “game changer”, said chief executive Alex Baldock, with more than half of online sales from phones and tablets.

M-commerce is likely to be a key battleground over the Black Friday/Cyber Monday weekend. Research by BabyCentre UK shows that almost two-thirds (62%) of British mums are shopping weekly on their smartphones. Almost half rely on their smartphones to find vouchers or deals, a steep increase since 2013.

Some shoppers have started searching for Black Friday deals, and retailers are prepared. Argos has a countdown on its website for Black Friday while John Lewis will match the sales prices of competitors under its ‘Never Knowingly Undersold’ commitment.

But thanks to the discounts, retailers are also taking a profit hit on Black Friday, says Jon Copestake, chief retail and consumer goods analyst at the Economist Intelligence Unit. It is unlikely that many luxury brands will dip their toes into the water, but the mid-market will be making up for that, he adds.

However, some retailers do not regard the weekend as a marketing opportunity. Melissa Littler, marketing and PR director at flash sales site BrandAlley UK, says that “because we offer dramatic discounts every day, promoting yet another sales message or offer to our customers around these dates simply wouldn’t cut it”. She adds that the online discounters would have to do something “spectacular to cut through all the other sale clutter around that time”.

So, with the large retailers better prepared and likely to spend big on campaigns, how can brands be heard?

Much like the shoppers dodging punches in Asda, it comes down to agility, says Missguided’s Betts. “We’ve got a plan in place, but we’re agile enough to react,” she explains. “We are continuously evaluating and modifying [our plan] up until 27 November and will do the same over the weekend. If the weather’s bad, we’ll encourage people to stay at home and shop. On Friday when people are at work, we’ll target customers on their lunch break.” Regardless of the tactics used, it is going to be “big, bold and broadcast”, she says.

“If the weather’s bad, we’ll look to encourage people to stay at home and shop. On Friday when people are at work, we’ll target customers on their lunch break.”

Most retailers are guarded about their marketing plans – a sure sign of how significant these dates have become. However, the strategies are likely to be different from those that will be used at Christmas. The timeframe of one weekend for consumers to take advantage of deals means there is a single, short-term goal.

There will not be the emotion seen in the Christmas ads, says Will Shuckburgh, managing director at loyalty scheme Nectar. “A lot of brands will go for headline-grabbing deals that are not sustainable. It’s easy as a marketer to think you can buy customers with discounts, but that’s rarely the case. People will look for deals but often with the brands they have built a relationship with.”

In search of new customers

However, that does not mean these dates are not a happy hunting ground for brands looking for new customers. “It’s an opportunity to generate incremental revenue through new customers,” says Missguided’s Betts. “It’s promotionally intense, and it would be remiss of us to do anything different.” However, this is not just a one-weekend stand, she claims, adding there is no sign that the events will cannibalize sales from closer to Christmas.

Owen at Shop Direct agrees: “The weekend works really well for new customers. There’s a perceived wisdom that [online Christmas shopping] gets later and later, so to bring it forward isn’t necessarily a bad thing. It’s good for consumers and retailers.”

There will be plenty of silliness among customers charging through the aisles, but Black Friday and Cyber Monday are now serious dates in the UK’s retail calendar. 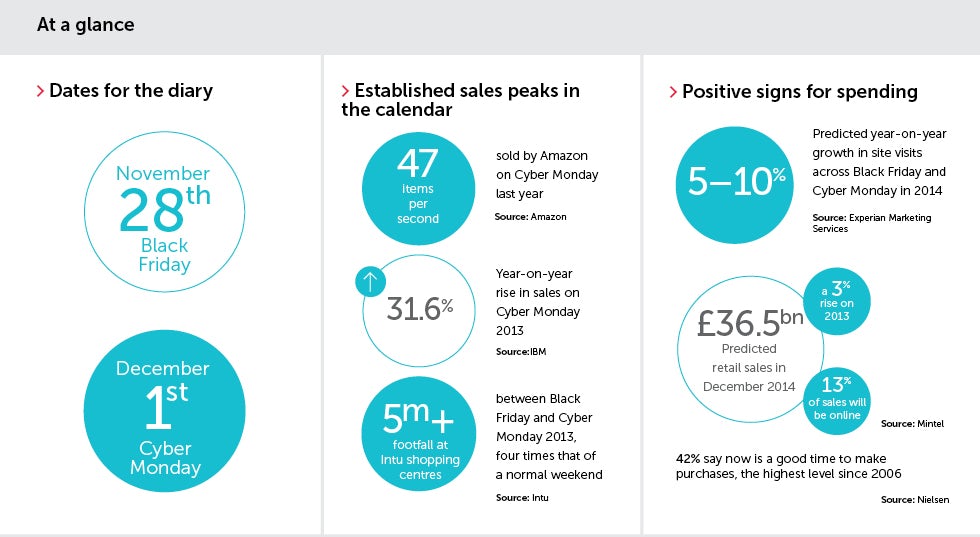