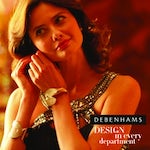 Arcadia Group, which owns Topshop and Dorothy Perkins, says it is cautious for the year ahead despite posting a 13% leap in profits.

The retail group, which is led by chief executive Sir Philip Green, says pre-tax profits for the year to 29 August were £213.6m.

Total sales across the group’s retail portfolio, which also includes the Burton and Evans chains, increased to £1.7bn, up 2.7%, though like-like sales were flat.

The group says the new financial year has started well with like for like sales up 2.3% since August.

Sir Philip, says he is pleased with the group’s performance in “one of the most challenging retail landscapes” he has seen but remains cautious about the year ahead, adding that January’s VAT reversion, rising unemployment and the general election could make for a difficult year.

Meanwhile, department store Debenhams has also registered an increase in full-year profits, up 14% to £120.8m driven, it says, by the performance of its Designers at Debenhams range.

News of the profit increases and Arcadia’s positive autumn sales performance come despite Office for National Statistics figures that show retail sales failed to grow from August to September but were up 2.4% on last year.