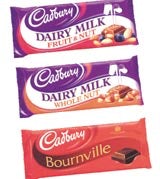 Cadbury Trebor Bassett is facing a potential backlash from both the trade and consumers over its under-99 calorie chocolate bars because the products are smaller but more expensive than the original versions.

Industry insiders say that the initial consumer interest in the 17.5g versions of Dairy Milk, Dairy Milk with Mint Chips and Bournville will wane as consumers realise that the bars, costing 25p, are more expensive than the 49g bars, which sell for 40p.

The only respect in which the new bars differ from their original counterparts is in being smaller.

The product has been badly received by retailers, who believe that consumers will not buy the product after realising that they are being “ripped-off”. One industry insider describes the launch as a “ridiculous proposition” and points out that the bar is a third smaller yet over half the price.

The new bars, which are only just being rolled out to stores, is Cadbury’s first product development in response to the obesity crisis. Although it has mooted the launch of a low-sugar Dairy Milk, it has yet to act (MW October 30, 2003).

Cadbury is understood to be planning to display the range prominently in stores and the bars will carry the “under-99 calorie” message on the front of the packs to help consumers see how many calories they are consuming.

Cadbury was not available for comment as Marketing Week went to press.