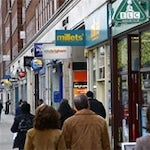 Retailers took 11 of the Top 20 rankings in the Reputation Institute’s UK Pulse Report 2010.

Seamus Gillen, managing director of Reputation Institute UK, says: “Despite a recession in 2009, it appears Britain’s best loved high street and retails names have worked hard on their reputations, which should pay dividends when people become financially more confident.

The banking sector continued to rank badly in the wake of the financial crisis as Royal bank of Scotland (138), Lloyds Group (136) and Barclays (129) languish at the bottom of the table of 140 brands.

Cadbury maintained its 3rd place ranking and improved its reputation score despite the takeover by US company Kraft.

Gillen says: “Companies are quick to champion their customer service but it is clear events like striking staff and poor service stay in the mind of the public.”

The report measures corporate reputation among the public and surveyed 5,500 online consumers during January and February.