Once upon a time being vegan was mostly associated with anarchist punks and Earth-loving hippies who lived on methane-inducing diets largely made up of vegetables and legumes.

Fast forward a few decades and veganism is taking the mainstream by storm. It has given cauliflowers a renewed sense of self-worth and shown the world that anything meat can do, plants can do too. Yes, that’s right, they can even ‘bleed’.

Last year, the UK launched more vegan products than any other nation, making it the country’s fastest growing culinary trend of 2018 with a market worth of £310m.

While it is estimated that only 3% of UK consumers are vegan – almost half of those made the change in 2018 and a third are millennials – demand for vegan food is being driven by a much broader consumer base, whether for reasons of health, environment, or simply a desire to eat less meat.

Perhaps most surprising of all, Kantar estimates 92% of plant-based meals consumed in the UK in 2018 were eaten by non-vegans, with approximately 22 million people now identifying as ‘flexitarian’.

It’s no wonder brands are jumping on the beanwagon.

Supermarkets have been especially quick to respond to the rise in veganism and even sharper rise in flexitarianism over the last 12 months.

Tesco was one of the first supermarkets to launch an own-label vegan range. At the beginning of 2018 Wicked Kitchen hit the aisles of 600 stores nationwide.

Led by Derek Sarno, director of plant-based innovation, Tesco sold four million vegan meals from the range within the first eight months, prompting it to double the range to 46 items – which now includes a smoked salmon-style carrot sandwich, curried protein pot, pesto lasagne, Chinese BBQ shreds and greens and what it claims was the UK’s first vegan sausage roll (pre-Greggs).

If we can get our customers to really care about this stuff and make decisions around it, that’s scalable and that’s where we can impact change.

Together with European plant-based food brands Oumph! and Vivera, which Tesco also stocks, overall sales of chilled vegan food at the UK’s largest supermarket have grown by 25% year on year.

“What we’re seeing more and more is that the group of people that want to have a vegan-based diet is growing, and for very different reasons,” Tesco boss Dave Lewis tells Marketing Week.

“For some people a particular niche is very important based on belief or intolerance. Then there will be other people who want a healthier diet and therefore go for a slightly different proposition.”

Morrisons, which launched its vegan V Taste range in September 2018, has seen a similar shift in consumer behaviour, as CEO Dave Potts explains: “In the area of food, there’s quite a movement going on where people are buying more vegetables, chickpea curry and not beef. That’s the biggest trend we’ve seen. Flexitarianism and people wanting to have a healthier life is altering the things they buy.

“How we respond to the shifts in consumer trends around veganism, I’m looking forward to seeing how Morrisons adjusts and reacts to that.”

Waitrose, meanwhile, has seen searches for ‘vegan’ on waitrose.com double over the last 12 months, with sales of its 65 own-label and branded vegan and vegetarian ranges up 110%.

Iceland’s motivations, however, go beyond the growing flexitarian market. While the supermarket’s boss admits the decision to launch a vegan range was mostly a business move, Iceland is hoping it can “nudge and encourage” customers to think more about the environment and ethical buying decisions.

“We know we need to start eating less meat and we sell a lot of it. We are slowly trying to nudge and encourage more plant-based alternatives,” says Iceland’s managing director Richard Walker.

“We talk internally about democratising environmentalism because it’s a very middle class thing. If we can get our customers to really care about this stuff and make decisions around it, that’s scalable and that’s where we can impact change.”

Vegan for the long-run

The immediate boom in sales of supermarket vegan ranges – which are still in their infancy compared to the 1980s, early 1990s plant-based pioneers such as Linda McCartney, Quorn and Alpro – makes sense as excited vegans, veggies and meat-eaters alike flock to try new products out and see how they compare to what else is available in the market.

But securing longer-term appetite will be dependent on a number of factors. For one, the way products and ranges are positioned in-store will be key to maintaining cut-through in a society where meat-based diets have been the norm for so long.

Sainsbury’s move to become the first UK supermarket to place its vegan products – many of which have been designed to look and taste like meat – within the meat section is one that other grocers should look to follow. If they don’t, there is a risk that shoppers, many of whom will likely be meat eaters, won’t bother to look for vegan aisles or simply forget they exist.

Price will also be a barrier for many consumers. Again, because supermarket ranges are still in their early days, a lot have come to market with incredibly high price points and vegan versions of meat-based meals are often more expensive.

At Tesco, a pack of two Beyond Burgers – the bleeding burgers created by Beyond Meat – sells for £5.50, while most Vivera products are £2.99 and all Wicked Kitchen ready meals £4.

While we can expect the price of meat substitutes to drop as supply increases, there are plenty of cheaper options that have sufficed so far and gained a loyal consumer base.

Newer players will need to be mindful that they give consumers enough reason to keep buying their products in the meantime.

And if the end goal, like at Iceland, is to get people to eat less meat, price-matching vegan and meat products will be key in the long run, if not making them cheaper altogether.

If the price of plant-based alternatives does eventually reach a democratised price point, it will be interesting to see how this impacts sales of meat and dairy overall.

Competition is a good thing, it’s helped us to define what we need to look for in taking the market to the next level.

Concerns have been raised around the health and nutrition of supermarket ranges as well. For example, Marks & Spencer’s new vegan range Plant Kitchen has been reported to feature allergy related warnings for egg and dairy.

Meanwhile, some pastry party-poopers have chosen to note that Greggs’ vegan sausage roll, which sent the nation into a frenzy when it began wafting down British high streets in January, has nearly a gram of sugar in it compared to its sugar-free piggy peer and 0.3g more salt.

“While these products are better for the animal welfare, not all vegan foods are healthier than the standard options and this is noticed by consumers,” says Aleksandrina Yotova, consumer analyst at Global Data. “As consumers want vegan products to be healthier alternatives to meat and dairy, the lack of clarity will be off-putting for some.”

But if you’re in Greggs, whether you’re a die-hard vegan or just trying to reduce your consumption of animals, you’re in there for a reason and it’s not for a low-sugar pastry.

One brand looking to have a point of difference around health, however, is plant-based OAP Alpro.

The Belgian brand, founded in 1980, is mostly known for its many alternatives to milk and yoghurt, and more recently ice cream and chilled coffees. But as competition really begins to heat up – especially in the alternative milk market which now includes increasingly popular brands such as Oatly, Rude Health, Plenish, Innocent and Rebel Kitchen – Alpro is preparing for its “biggest year of innovation and marketing activation”.

This will involve pushing its ‘unsweetened’ range as a healthier alternative to plant-based milks which are often loaded with sugar, as well as positioning itself as an “environmentally-friendly” brand.

To build this awareness, especially among millennials, Alpro is taking more of its products to the streets so people can try-before-they-buy. In February and March it handed out 350,000 samples to people in supermarkets, on the high street and at its various pop-up stores – much more than it has done in the past.

“One of the biggest focus areas for us in 2019 is accessing the two in three that aren’t currently buying into plant-based and trying to make plant-based relevant for them,” explains Stephanie Balsom Eynon, Alpro’s junior media marketing manager. “It’s a good entry-point for people and we’ve got the experience to be able to offer the key products they’re looking for.”

Even though Alpro has four decades of brand heritage behind it, it believes product is just as important. This is what led it to develop the world’s first 100% edible, zero waste vegan takeaway in partnership with Deliveroo for Plant Power Day, an example of how existing plant-based brands are having to think outside the box in terms of how they serve consumer demand.

“Competition is a good thing because it shows how much demand there is out there,” Balsom Eynon says. “It’s not something that has made us work harder, it’s just helped us to define what we need to look for in taking the market to the next level. Retailers and supermarkets are allowing us to do that.”

All aboard the beanwagon then. There won’t be room for everybody and there will be some cauliflower casualties along the way. But competition fuels innovation and this market is certainly ripe for that. 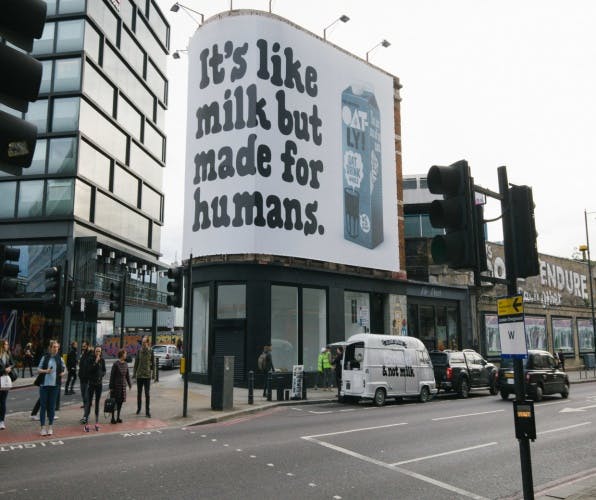 The UK’s largest supermarket has launched a nationwide programme designed to help community groups prepare nutritionally balanced meals out of surplus food donations as it looks to find new ways to tackle the issue of food waste.