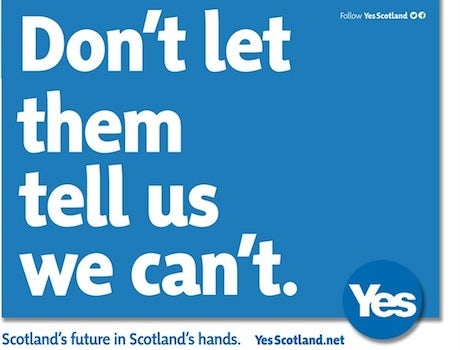 “If Scotland becomes a different jurisdiction and prices in Scotland change then perhaps it would have to change to be ‘never knowingly undersold in Scotland’,” he said.

The head of the John Lewis Partnership, Sir Charlie Mayfield, has also warned that prices could increase in an independent Scotland. At the moment many retailers spread the higher cost of doing business in Scotland across their UK operations. However he said that if Scotland becomes a separate country national pricing might well be scrapped.

“The costs of doing business for most retailers are higher in Scotland than the rest of the UK but most retailers have one price across the UK. In the event of a yes vote that could change,” he added.

Asda boss Andy Clarke echoes that view. He says Asda is currently set up for a single UK market but that if Scotland votes for independence it would introduce a separate Scottish business and prices could therefore rise. That could impact Asda’s 10 per cent cheaper price promise, with the supermarket likely to compare its prices to other retailers in Scotland, rather than across the whole of the UK.

“If we no longer operate in one state with one market and – broadly – one set of rules, our business model would inevitably become more complex. We would have to reflect our cost to operate [in Scotland],” says Clarke.

A number of retailers leaders, including Marc Bolland at Marks & Spencer and Sir Ian Cheshire of B&Q owner Kingfisher have added their names to a letter spelling out how a “yes” vote could impact costs that is set to be released tomorrow, according to the Guardian. However, a number of other retailers are understood to have refused to add their names over fears of alienating customers north of the border.

Shore Capital analyst Clive Black says Scottish consumers may be “miffed” at retailers getting involved in the debate. However, he believes retailers are simply “saying it how it is” and that the Scottish people should be told of all the issues if they are to make an informed choice.

“If independence leads to the greater probability of higher prices then Scots need to take that on board. Treating them as grown-ups makes sense. If it is independence, then they can’t say they weren’t warned if there is differential pricing with the rest of the UK, which appears highly plausible,” he adds.

Read our piece on what a “yes” vote would mean for ad regulation.