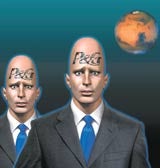 The sudden and unexplained departure of Masterfoods vice-president for European petcare marketing Ann Francke (MW last week) inspired one insider to comment that “she was too Procter &amp; Gamble for Mars”.

Francke had worked for a number of years at P&G before joining Mars in 1999. While other observers have poured scorn on the suggestion that she couldn’t fit in at Mars because of her P&G training, the insider’s comment raises the question of how easily executives schooled in the P&G approach to marketing adapt to other business cultures. Francke herself was unavailable for comment.

With P&G’s downsizing over recent years and the push towards globalisation, the old ways of working at the company are becoming unsustainable. Along with the centralisation of European operations in Geneva (to where some staff have declined to relocate), this has led to a diaspora of P&G executives, many of whom are taking up jobs in rival organisations.

P&G is famed as an “academy of marketing” for its rule-book approach to selling, but it is also lampooned as something akin to a robot factory, producing clone-like executives, dubbed “Proctoids”. While this is no barrier to success – a number of the UK’s top businesspeople are former Proctoids – some believe that P&G’s strict training programmes and disciplined, military-style culture can create problems for executives who take jobs in other companies.

In a statement, a P&G spokeswoman says: “P&G places great value on diversity and sees it as a strength, contributing both to successful marketing and the overall strength of our company. Our passion is that ‘the consumer is boss’ and that great products and marketing will be rewarded with lifelong loyalty. We have marketers of very different personalities and styles but they all share a passion for winning. P&G people are constantly pushing at the boundaries of communications, with all manner of different forms of holistic marketing and consumer communications being explored.”

She adds that P&G is recognised as the best “marketing university” in the world and former P&G employees consistently take leadership positions in many companies.

IPC Southbank marketing director Helen Farquhar – who worked at P&G for nearly 8 years, most recently as European brand manager on new brands – comments: “Anne Francke was a top-rated manager at P&G and a much-regretted loss. Some people who stay at P&G too long – more than ten years, say – can’t fit in at other companies, but she was not like that. While I never worked for her directly, reports of her were always that she was a successful businesswoman who was fun and open-minded to work for.”

If anything, the P&G culture has been strengthened by recent management. Chief executive Alan Lafley is regarded as an exceptional businessman and an inspirational leader and motivator of people. Over recent years, senior management have had to be strong in both areas. Years ago, the focus was much more skewed towards delivering the business results.

And another insider familiar with both P&G and Mars says Francke is not so much too P&G for Mars, as too Mars for P&G: “P&G’s corporate culture is a decent one. The behaviour in meetings and business situations shows there is a sense of decency and manners. They are aggressive marketers but they expect a certain protocol. Mars has a much more confrontational culture.”

The insider says Francke has a strong personality and takes a clear point of view on issues, an approach much more attuned to the Mars culture. Another observer sees Mars’ culture as more individualistic, with less of a team approach. Successful executives are treated as stars.

The roll call of former P&G executives from the UK who have triumphed outside the company is impressive. It includes Crispin Davis, now chief executive of publisher Reed Elsevier; Gary Haigh, Diageo’s global ready-to-drink director (in charge of Smirnoff Ice); Philip Jansen, managing director of Telewest Broadband’s consumer division; and Nestlé Rowntree marketing director Andrew Harrison. Mars, on the other hand, can boast Allan Leighton, who became boss of Asda and now runs the Post Office.

If we’re all the same to you

One former top P&G executive, John Hardie – who went on to become marketing and commercial director of ITV and is now managing director of branded television in Europe, Africa and the Middle East for Walt Disney Television International – says P&G people need to be flexible when they go into new organisations, and should realise that the P&G marketing method cannot simply be transferred into another business. He says: “You may come across as arrogant or as missing the point and you won’t crack it. Don’t go in and apply the same processes.”

He believes P&G’s approach to marketing can produce fantastic results, though only under very specific conditions: “P&G is brilliant at a particular approach. It is about trying to understand better than other people how the consumer uses and relates to a product category, and what it is like for the consumer to use it. You make a product that is better than the competition in a way that is noticed by the consumer.” The marketing consists of hammering home the product’s advantage over its rivals through explicit advertising, such as product demonstrations. But the split-screen Head &amp; Shoulders ads, showing the difference in dandruff levels between using the product and using another, have come to look increasingly absurd and outdated. Hardie says the approach has become more sophisticated over recent years, though the underlying method is still there.

He says the P&G training is like teaching a single, stunning knockout punch to a boxer. If the boxer manages to land the punch, he will floor his opponent. But Hardie concedes that this coup de main is not always successfully placed.

And when a P&G marketer goes to another company, adapting to a new environment may be hard. Other companies’ products may be generic, have no particular superiority over rivals – or even fail blind comparison tests – but by sheer advertising weight, persuasive creativity or distribution muscle they can triumph. Hardie says: “P&G is not good at marketing products that are not better than the rest.” Maybe this is not a great training for the outside world, where there is often little to choose between products.

The blueprint is changing

But the great corporate cultures that grew up during the sunshine years of packaged goods consumerism from the Fifties to the Eighties are now having to reinvent themselves. The P&G method, where the steps to launching and marketing a product are written down on one piece of paper, is being revised. The old ways of doing things at Unilever, Kraft, Mars and other consumer goods companies are also being remoulded.

Paul Walton, chairman of consultancy The Value Engineers, says: “P&G and Mars have both been working very hard in recent years at making significant changes in their cultures.” He points to the news last week that Mars has ended its 50-year relationship with advertising agency D’Arcy (MW last week) as evidence that in the new push for global domination, sacred cows are being culled.

Them, us and others

And the days when graduates would secure a job at one of the great marketing corporations and stay there for the rest of their lives are over. Marketers are moving around a great deal more. Walton says: “Everybody is striving to find the best solution, which means getting much better at different ways of working. Mars has had a great brand extension culture, very good at managing its portfolio. You could say the challenge of being a truly world-class global brand is to keep what’s best about your culture and at the same time not shut yourself off to the process you need to get better.”

While there are similarities between P&G and Mars, industry commentators see the culture of Unilever as quite different: “Unilever is more multi-cultural and prides itself on being more creative. The culture is more devolved to national managers. That’s why they have got so many brands which they are trying to cut back.” Similarly, they say, Kraft in the US has started hiring marketers from different backgrounds, not just as a nod towards political correctness, but because different products require it. Kraft’s Oscar Mayer children’s snack brand has recruited mothers to work on marketing, as they have a greater understanding of children than do twentysomething business school graduates. Kraft refuses to comment on this.

P&G operates a policy of never hiring executives from outside, preferring to promote from within. Graduate trainees – 20 to 30 are hired each year – are selected with a view to their potential as category directors and chief executives of the future. But the company misses out on having executives with a wide range of experience. If P&G continues to work from a rule book in a world where the rules are being rapidly rewritten, it may find itself disadvantaged.

A major problem for many of the consumer giants is their inability to adapt to the fragmenting media environment. The big TV campaign is still at the heart of their approach. They are not attuned to the direct and one-to-one communications that are seen as the future. Many have dabbled unsuccessfully – Heinz famously dropped product-based TV advertising, and beefed up direct marketing activity (MW April 8, 1994), but had to come back to the fold with its tail between its legs. Unilever’s dalliance with the Jigsaw direct marketing consortium has produced few positive results and P&G’s investment in the Internet has not paid off.

Few, however, expect all this to lead to the immediate death of the Proctoid, however much of a relic from a bygone age he or she may be. Companies the size of P&G change very slowly in a world that reinvents itself quickly. Their corporate culture is bound to be a few years behind the latest marketing trends.