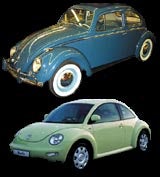 Resurrecting yesterday’s styles as this season’s trendy gear has long been the name of the game for fashion designers. Now marketers are cottoning on to the idea that brands from a bygone era can be tweaked to appeal to 21st-century consumers.

As Eighties-style batwing tops rub shoulders with Victorian-inspired high-necked blouses in high street shops, driving a VW Beetle is cool once again and Fifties-style Smeg fridges are taking pride of place in kitchens across the country.

Revlon is one of those companies turning to the old brands in a bid to revitalise its business. New advertising for the iconic Charlie perfume, launched in 1973, will be rolled out next year as part of a plan to refresh and reposition the brand. The company is also planning to advertise its anti-perspirant brand Mitchum for the first time in the UK since its launch in the Seventies (MW last week).The company has appointed Wieden &amp; Kennedy (W&K) to handle both briefs.

Charlie and Mitchum are not the only brands to be given a new lease of life 20 or 30 years after their launch – brands from Brylcreem haircream to motel ITV soap opera Crossroads, through toys such as Action Man and Atari are making a comeback.

But how easy is it to convince today’s brand-savvy consumers to embrace a product that for one reason or another has fallen out of favour with a previous generation?

Charlie Wrench, managing director of brand and design consultancy Landor, says anyone thinking about revitalising a tired brand has to ask why it faded in the first place: “Was it because people stopped finding it relevant or interesting, or was it because the manufacturer stopped making it? The Beetle is a case in point. People always loved the Beetle, but Volkswagen stopped making it as the car industry moved towards efficient rather than character cars. It relaunched it because people were again looking for cars with a point of difference.”

Brand experts agree the main challenge is retaining the brand’s values while ensuring they are relevant to contemporary consumers. It is not enough to launch an ad campaign proclaiming the product is back on the shelves after a revamp, it has to fill a gap in today’s market.

Datamonitor managing analyst Neil Broome says brands which draw on the Thirties and Forties for their image and packaging tend to become synonymous with quality and decadence because of the impression many people have of that era. But, he warns: “I think the Seventies are too recent to be reviving brands from that period. There are still people around who remember what the brand was like the first time. The question is: how much is pure brand recognition worth?”

The alcoholic drinks market, for example, has changed radically in the past 20 years with the arrival of alcopops and New World wines. Broome questions whether relaunched drinks brands such as Blue Nun and Babycham – both of which have become “icons of naffness” since their heyday – can really carve out a niche for themselves in the modern markets.

Message on the bottle

Some branding experts say that Langguth Wines &amp; Spirits, the owner of Blue Nun, is making life unnecessarily difficult for itself by marketing the product under the original Seventies name, even though the taste of the wine has been adapted to appeal to more modern tastes.

But Richard Hammond, managing director of Spirit, the advertising agency behind the relaunch of Blue Nun, says: “Blue Nun is still the 12th-biggest wine brand in the UK. To abandon the name would be to walk away from a very big market.”

Graham Harding, development director at branding consultancy Value Engineers, says reviving an old brand can only work if it does not take itself too seriously.

The revival of Mitchum seems to be all about that. An industry insider says: “With a name like Lady Mitchum [the female version of the brand] what else can you expect, if not a bit of fun?”

Almay &amp; Revlon toiletries group product manager Ian McCarthy says: “Mitchum has a very loyal customer base, so it is tried and trusted. People use Mitchum not because it is a trendy brand, but because it works.”

W&K managing director Amy Lawson agrees that Mitchum is a no-frills product that does exactly what it says on the packaging. “This brand is a sleeping giant,” she adds, “and we want to see whether, with a bit of a push, it can wake up again.”

But, the brand experts aren’t convinced. Value Engineer’s Harding suggests that Revlon may have been better off relaunching the product under a different name, while Landor’s Wrench says the revival should be treated as a new launch as so few people have heard of the Mitchum brand in the first place.

Charlie, on the other hand, is a brand that is already imprinted on people’s minds. The challenge for Revlon in this case is to bring the brand’s values into the 21st century and make sure they are relevant to today’s 15-year-olds.

Wrench adds: “Revlon may have a very good idea about what today’s teenagers want, but it can’t just attach Charlie to those aspirations if the brand stands for something different.”

W&K’s Lawson argues that the values which made Charlie popular in the Seventies are just as relevant today: “Charlie was the original rebel, it was modern, sexy and daring. That spirit taps into something that teenage girls will always feel and that is what we want to capture in the advertising.”

According to Revlon, sales of both Charlie and Mitchum have continued to increase within a declining anti-perspirant and mass fragrance market, and have built up brand loyalty on the back of very little advertising support.

But revitalising an icon of the past is not always easy, as Sixties fashion label Biba found out when it relaunched in the early Nineties. Although original Biba pieces are still being snapped up for hundreds of pounds in second-hand stores, the Nineties versions failed to impress shoppers and the company closed its London store in 1999.

Another icon of the Sixties, the much-hyped fashion magazine Nova, was revived by IPC Media last year only to have the shutters pulled down within days of it reaching its first birthday, in May this year. It failed to secure the following it had enjoyed 40 years ago, partly because of tough competition from a string of rival glossy women’s titles launched last year, such as CondÃ© Nast’s Glamour. It notched up sales of just 75,142 (July-December 2000 ABCs).

Toys and games companies have been quick to capitalise on the popularity of retro brands. Atari, the brand credited with launching the video games console market nearly 30 years ago, is being given a new lease of life by owner Infogrames, which is releasing 12 classic Atari games. And Hasbro has relaunched Action Man with an updated look to make the classic toy appeal to today’s children. But it could be argued that the enduring appeal of toy brands such as Barbie and Lego is partly because of the nostalgic feelings they evoke in parents.

Meanwhile, Brylcreem, another brand which enjoyed its heyday in the Sixties and Seventies, has seen its brand loyalty rise by four per cent since it relaunched in October 1999 (source: Taylor Nelson Superpanel – January 2001). Manufacturer Sara Lee Household &amp; Body Care used celebrity endorsements to revitalise the brand and scored a coup when it signed up footballer David Beckham as the “Brylcreem Boy” in 1997.

Some brands from the past such as the VW Beetle and Smeg fridges tap into the zeitgeist by evoking emotions in people that their sleeker, hi-tech 21st-century counterparts can’t.

Wrench says: “There is a long-term trend towards authenticity and individualism. People don’t want to drive the same cars or have the same fridges as everyone else. That is where brands like Smeg and Beetle come in – they offer both a point of difference and nostalgia which in turn makes them distinctive and indulgent.”

BMW aimed to tap into this trend when it invested £200m in relaunching the Mini in July this year (MW June 21). The Mini has become one of the UK’s most famous motoring icons since it first hit the streets – then under the BMC umbrella – in the Sixties, but critics say the new model, half a metre longer than the original Mini, will find the current market a tough one to break. This time around the Mini faces competition from mass market brands such as the Renault Clio, but also deluxe models such as the Audi A2.

In with the old

“People are craving stability and that is something brands which awaken a sense of nostalgia can help bring,” he says. “Marketers have become increasingly smart at tapping into that emotion. They have realised how incredibly powerful it is and how difficult it is to successfully launch new things.”

A revived brand has to bridge the gap between the old and new in order to achieve longevity in the competitive, modern market. The VW Beetle and Smeg fridge may have the look of the past but under that retro exterior lies the best of modern technology.

Serving Blue Nun at a Seventies-themed dinner party may be a trendy thing to do at the moment, but unless the product tastes good it will be relegated to the back of the fridge as soon as the Seventies revival gives way to the next passing trend. Similarly, unless Charlie and Mitchum can tap into the hearts and minds of today’s consumer and offer a point of difference from contemporary competitors, they may find their loyal band of followers turning to different products on their bathroom shelves.

It should be no surprise that the attacks on the US were used by a spin doctor as cover to release bad news, but don’t bees sting and skunks smell? asks Iain Murray

Centrica has lured Beenz marketing chief Dale Clements back to the company. He is to become marketing director for the company’s new venture, Golf England. Golf England is an initiative between the Centrica-owned Automobile Association, the English Golf Union and technology company AdvancedWave. Clements left Centrica, where he was head of marketing development, to join […]

The pitch is as integral and time-honoured a part of the ad business as the commission system. Many would suggest the similarity doesn’t end there: both are also hopelessly outdated. The failings of the pitch ‘process’ – and the antique etiquette which surrounds it – were thrown into sharp relief last week, when M&C Saatchi […]