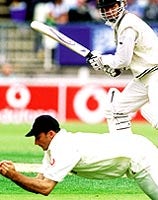 The move means ten to 12 ads can be shown on one perimeter board during a match.

Ten boards have been erected at the Oval, home to Surrey County Cricket Club. The system, which has been installed by Oneillmovingmedia, stretches over 50m of the field’s perimeter. It will be in place at all games, including test matches and one day internationals, and will be programmed to change after each over.

Last year, Australian financial services company AMP signed up as naming rights sponsor for the Oval. The deal, which worth £2m over five years, marked the end of lager brand Fosters’ 13-year association with the venue.

Last week, The Times confirmed that it is to sponsor Channel 4’s cricket coverage. The sponsorship covers C4’s live coverage of the three tests, which started last week against Sri Lanka, and the test series against India, to be screened from July to September.