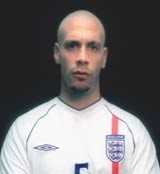 Footballer Rio Ferdinand stars in a new television campaign to promote the Special Olympics European Football Week. The ads, created by J Walter Thompson, tackles prejudices associated with the mentally handicapped and features Ferdinand in his dressing room talking to camera. As he talks, the image revolves and his face reappears as Barry Cairns Jr, a British Special Olympics athlete who has Downs syndrome and who appeared in the Special Olympics 2001 campaign. The ad ends with a call for people to get involved. Special Olympics European Football Week runs from April 22 to 29 and includes a number of competitions and events at local and national level. The television activity will also be supported by a press campaign.