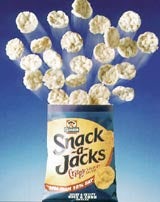 Rispinos launched in 2000, backed by a &£1.2m television advertising campaign through D’Arcy. The product is available in three sweet flavours and three savoury. Masterfoods had hoped to capitalise on increased consumer interest in low-fat snacks, but instead became involved in a battle for shelf-space when Quaker launched Snack-a-Jacks at the same time.

Snack-a-Jacks gained an added advantage when sister company Walkers took over its distribution last year, giving it a valuable way into stores.

One industry insider says that Rispinos did not get effective marketing support and that the brand was “thoroughly beaten” by the Quaker product.

In 2001, Mars merged its UK petcare and food division to become Masterfoods UK (MW November 8, 2001). The same insider comments: “Since the businesses were merged, there seems to be no focus and because of this Rispinos suffered.”