I don’t know if you saw it over Christmas, but Glass Onion is fantastic. Rian Johnson’s modern whodunnit features the return of Daniel Craig’s detective Benoit Blanc, along with a host of co-stars led by Edward Norton. The movie tells the story of a series of unlikely characters invited to a surprise something in which someone kills someone else somewhere with something. I don’t want to spoil it. But at the end something else happens.

The movie was a critical hit, with most reviewers rating it as one of the films of the year. But Johnson, who wrote and directed the movie, had one major gripe with its release. The name of his new film was changed at the very last minute, much to his chagrin. Originally titled Glass Onion, the movie was rebadged as Glass Onion: A Knives Out Mystery days before its November premiere.

“I’ve tried hard to make it self-contained,” the 49-year-old writer-director explained during a launch interview with The Atlantic magazine. “Honestly, I’m pissed off that we have ‘A Knives Out Mystery’ in the title. I wanted it to just be called Glass Onion. I get it, and I want everyone who liked the first movie to know this is next in the series, but also, the whole appeal to me is it’s a new novel off the shelf every time. But there’s a gravity of a thousand suns toward serialised storytelling.”

In modern branding architecture parlance, the movie went from a shadow-endorser approach all the way across the Brand Relationship Spectrum to a sub-brand strategy and clearly the director was not happy about the outcome. Using movie sequels is one of the simpler and more logical ways to demonstrate Aaker and Joachimsthaler’s famous continuum of how brands relate to each other within a company’s portfolio.

It’s a deceptively simple model but one at the very centre of one of the most crucial branding decisions that any organisation can ever make. On one extreme, the ‘house of brands’, the company opts to make no connection between its various brands and allows each to exist independently from the other brands in the portfolio in the consumer’s mind.

Our movie example is 1981’s Road Warrior, the sequel to 1979’s Mad Max. The original movie had a very limited release in the United States, so when a sequel was launched in America the decision was made to market it as a completely new, standalone film with zero reference to the original movie.

In contrast, on the other side of the Spectrum is the ‘branded house’, in which every product is branded using the exact same name. Our movie example is 2018’s Halloween, which carries the same title as the original film it is based upon. One that was made exactly 40 years earlier.

In between these two extremes, the Brand Relationship Spectrum takes us from a situation in which every brand within the portfolio is presented independently to consumers, to one in which everything is branded one and the same. And there are plenty of gradations along the way.

The Artist Formerly Known as Prince once sang that there were 23 positions in a one night stand. I’ve been married for 20 years so I’ll take his word for it. But I can confirm that there are nine positions in the Brand Relationship Spectrum, and if you work in marketing each one is just as exciting as anything the Purple One got up to at Paisley Park.

Rian Johnson’s original plan was to copy the style of Agatha Christie novels and maintain his protagonist, Benoit Blanc, while dropping him into an entirely new mystery and therefore a completely new brand. The point was not to hide the link to the original film but not to declare it either.

We call this kind of relationship a shadow endorsement, never explicitly declared but also never hidden. Think Jetstar’s relationship to Qantas or Mini’s connection to BMW. Just as Ridley Scott’s Prometheus was clearly a prequel to the Aliens movies but made no direct mention of that series in its plot or its marketing, Johnson wanted to trust the intelligence of his audience and also free up his new film to allow it to follow a completely different path.

But this plan was upended by Netflix, the producers of Glass Onion. They did not want the kind of independence that shadow endorsement conferred and were looking for a more solid connection to the original movie. The studio therefore opted to make Glass Onion a sub-brand of the Knives Out masterbrand and ensure the marketing of the new movie positioned it clearly as such.

There may not have been “a thousand suns” driving the name change, but there were certainly several very large planetary objects pulling the movie away from the independence of shadow endorsement and towards the inherent synergies of sub-branding.

First, this is the general trend across contemporary branding. During the Noughties many multinationals gloried in creating and acquiring more and more brands. A decade later the costs of maintaining and growing such a large, diverse portfolio became increasingly apparent and every smart company did two things.

They cut back the quantitative size of the portfolio of brands they operated. Everyone from P&G to FedEx demolished some of the houses on their property to reduce their marketing land tax and bolster their renovation budgets by focusing on only the biggest and best remaining properties. Then they moved as many of the surviving brands as possible from left to right on the Brand Relationship Spectrum, to ensure that the surviving portfolio was all aligned under as few brands as possible. Zero became a product variant of Coke, not a sub-brand in its own right. Picassa became Google Photos. More became less. The less began to deliver more.

Netflix is merely following a trend as established as any in modern brand management, in trying to attract as many customers as possible with as few brands as is feasible. Famously, the last 30 years has witnessed an incredible revolution in product development. When I was a kid there were a couple of famous sequels – The Godfather, Star Wars – but for the most part you went to the cinema to see a completely new story with characters that would not appear again once the credits rolled. The idea of prequels was unheard of. As was a movie stretching to its sixth or seventh iteration. Or one spawning a whole new series of films interconnected to the original, a la Marvel.

Hollywood made a movie. They marketed that movie. You went to see the movie. The End.

But over the last four decades, Hollywood has gradually realised that ‘big bet’ movies usually based on existing franchises are easier to sell, more efficient to market, significantly more likely to attract audiences and way more profitable. Six times more profitable if you follow the work of Professor Anita Elberse from Harvard Business School. If you want a perfect illustration of how the big bet theory applies to the world of marketing, invest five minutes watching LinkedIn’s Jon Lombardo explain it all in a fantastically inexplicable body warmer. 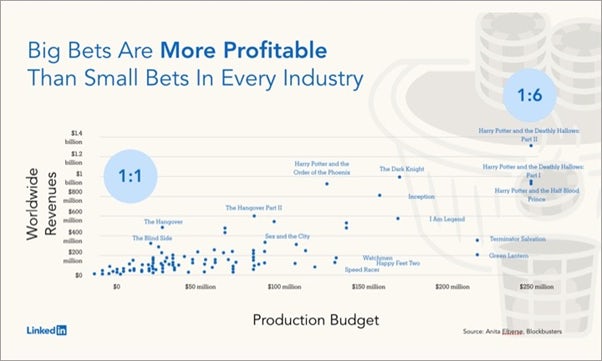 And there is a final planet-sized reason why Glass Onion had to become A Knives Out Mystery. And it’s driven by the longer-term aspirations of Netflix executives that run partly counter to the short-term commercial aspirations of an individual movie.

Knives Out was a surprise commercial smash when it came out in 2019. The film, which cost only $40m to make, grossed more than $300m in global box office receipts. Given the big bet, sequel mentality of Hollywood, it was only a matter of time before a bidding war erupted for a second film. That war was won by Netflix with what one bid rival called a “mindblowing” offer of $469m for not one, but two further Benoit Blanc movies.

When Glass Onion was in the can, Netflix showed it at various film festivals last Autumn and then gave the new move a limited cinematic run in both the UK and US. It did very good business and looked set to match the ticket sales of the first movie. But, after only five days, Netflix pulled the film from theatres and announced it would appear on its channel a month later on 23 December.

Queried about the move, Netflix CEO Reed Hastings accepted that he was leaving “lots of money” on the table. But he was unapologetic about his distribution strategy.

“We have two religions,” he explained to an interviewer late last year. “Member satisfaction,” Hastings said, thrusting the palm of his hand as far up as he could reach, “and operating income,” he added, dropping the same hand to a much lower level in front of him. In other words, as a subscription channel, Netflix gets the importance of the long over the short.

Glass Onion could have made $300m from the theatre box office. But Netflix needs Glass Onion: A Knives Out Mystery to help shore up the $24bn in revenues Netflix will generate from happy subscribers this year. Rather than a focus on individual titles and how they perform commercially and critically, Hastings and his team have a monotheistic obsession with making members feel like they are getting the best, first.

Rian Johnson was right to title his movie Glass Onion. But Reed Hastings does not care about that one movie. He cares about his customers and how they feel about their subscription to Netflix. He would have called the new movie Dogs in Space 3 if he thought it would have helped reassure subscribers that they were getting a great deal for their monthly fee.

And more brand architecture whodunnits await. The success of Glass Onion and the nature of Rian Johnson’s deal with Netflix mean that he is now busy working on a new Benoit Blanc movie. Or what Netflix will almost certainly refer to as the third instalment, and latest sub-brand, in the Knives Out mystery franchise. 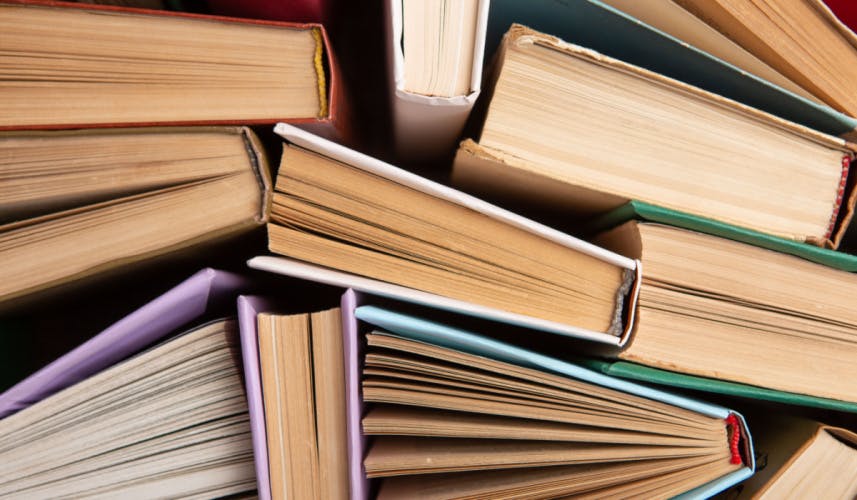 You’ve likely read the foundational books of Kotler, Keller and Levitt but there are a number of other books marketers should read to add breadth, insight and originality to their marketing arsenal. 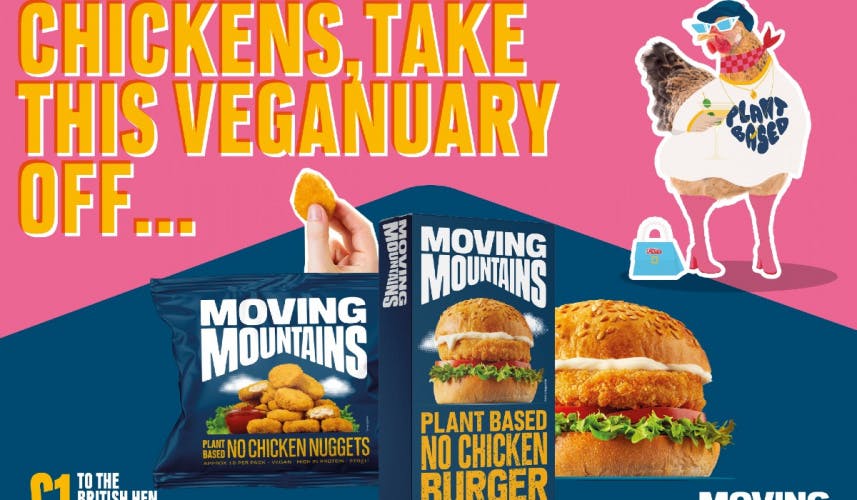 Plant-based meat alternative brand Moving Mountains is targeting more mainstream consumers for growth, believing it can win them over through its taste and sustainability credentials.