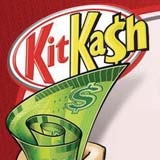 RMG:Connect has been added to Nestlé Rowntree’s below-the-line roster to handle the KitKash promotional activity.

It is understood that RMG: Connect won the business, which is worth close to £2m, following a pitch against Grand Union.

The WPP-owned agency has already produced online and relationship marketing work for the promotion, which will run for nine months.

Nestlé has now extended the KitKash promotion across its full portfolio of brands, which also includes Yorkie, Aero and Toffee Crisp. It was first launched last year on the KitKat brand (MW November 11, 2004).

The confectionery giant introduced the £10m scheme to replace the “Britain’s biggest break” campaign, which failed to capture the imagination of consumers. KitKash was launched in January last year with a £3m advertising campaign.

It works by giving KitKat consumers points inside wrappers, which they then enter into a website to win prizes, including Peugeot cars, trips to Paris on Eurostar and Expedia holidays.

KitKash 2006 is being supported by Nestlé UK’s largest online spend to date. MindShare Interaction is handling the promotion’s media planning and buying.