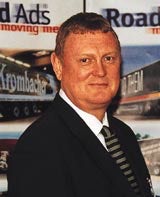 A company specialising in lorrymounted advertising has launched, claiming to be the first mainstream company of its kind in the UK.

The company says it will adapt all conventional poster sizes to fit on to lorries, including 96-sheet and six-sheets. Advertisers can book lorries in bulks from ten to 1,000 for a campaign of all sizes.

The ads can also be booked for specific areas of the UK and Europe, and can also target specific TV areas such as Carlton.

The company claims that ads on lorries stand out because no other means of advertising is allowed on UK motorways.

The company has tied up with Nav Trak, the 24-hour vehicle location system which uses the global positioning satellite system, and claims this will allow advertisers to track where their ads are at any time.

This is not the first lorry advertising company Michael Higgins has been involved with. Last summer he launched Kinetic Media, which failed to open for business after its funding was withdrawn.