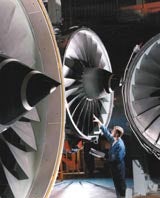 Engineering, aerospace and marine engines company Rolls-Royce has promoted the director of operations of its civil aerospace division, Stan Todd, to international director, with responsibility for all the company’s worldwide advertising and marketing.

Todd takes over the responsibilities of two senior executives who are to retire. Group marketing director Richard Turner leaves after the company’s annual general meeting at the end of this month, while director of international affairs Bob Crabtree retires at the end of July. Crabtree, who reports to Turner, oversees Rolls-Royce’s marketing offices worldwide. Todd will not be sitting on the company main board.

Turner joined Rolls-Royce in 1965. In 1995, he was a contender for the chief executive’s position, before it went to John Rose, managing director of the group’s aerospace interests. He has been a main board director for the past ten years.

Turner’s retirement comes almost a year after Rolls-Royce slashed ten jobs in its central marketing and corporate affairs department as part of a worldwide cost-cutting exercise (MW May 31, 2001), which will eventually see a total of 6,000 jobs lost over a three-year period. The cuts in the marketing department mainly affected middle-management marketers – Turner’s position was said to be safe at the time.

In March, Rolls Royce announced a nine per cent increase in underlying pre-tax profits to £475m, while the company’s order book grew by ten per cent to £14.4bn, despite the effects of September 11 on the airline industry.

The imminent ban on cigarette advertising is welcomed by many and championed by government, but it’s illogical, unfounded and an erosion of liberty, says Iain Murray

A new survey by Corporate Edge and Marketing Week suggests that, although young people are not sure of their own British identity, they still feel there is a British identity. When it comes to symbols of the nation, it seems that we are fascin

It must be the time of year for weird sponsorship offers. Hot on the heels of last week’s dinosaur story, the Diary has received another request to promote a sponsorship opportunity. This time the NSPCC is seeking a sponsor for a celebrity chair auction event, called Chairish the Child, at which 40 chairs owned by […]