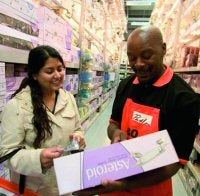 B&Q, the UK’s leading DIY retailer, has appointed Personal to handle the 8m launch of its financial products and services in association with HFC Bank (MW last week). The ten-year exclusive agreement with the HSBC-owned bank will begin with a branded store card early next year.

Many observers are questioning the financial services strategy in the light of recent results and the changing mood apparent in the DIY sector. B&Q owner Kingfisher reported that in the first half of 2006 underlying sales at B&Q were down by 5.5%, while profits fell by 43% to 82.6m. Rivals Focus and Homebase are experiencing tough times too, with sales at Homebase down 3% in the five months to August 31. Meanwhile, problems at MFI have been splashed across the newspapers as Merchant Equity Partners snapped up the chain for 1 in the light of huge debts. Kingfisher insists that a turnaround in B&Q’s fortunes is on track, while admitting it has been a difficult year. But it is clear that it’s not only B&Q that is struggling. Analysts say this is because the DIY market is evolving.

The UK had seen an upsurge in DIY and home improvement thanks to a stream of home makeover and renovation television shows. They are often watched by women, who have become the target market for DIY retailers. But the market has peaked, say analysts, and consumers have tired of the shows.

“All the big names appear to be moving in the same direction. There is no distinction in the market,” says Brandhouse WTS planning director Warwick Cairns, who has worked on both the B&Q and Wickes brands. “The major DIY retailers shifted their focus to become more female-friendly and began targeting consumers who are not so keen on DIY, who would rather pay a builder to do the work – an easier option now with the “Polish effect” of cheaper labour.”

Cairns says that by pursuing this strategy, B&Q ignored its core market of serious DIYers and tradesmen, and put itself “at a competitive disadvantage”.

Evolution Securities retail analyst Freddie George, who has worked in the DIY retail sector, agrees that B&Q and its rivals have been too keen to attract women. But he says they are moving on, as shown in new store formats.

George adds: “B&Q had embarked on a store revamp programme, but initially these had a more female focus, too. If you were a tradesman you’d probably walk out as it’s not the right format for you. But the Wednesbury store in the West Midlands, with its shop-within-shop concept, is catering for both women and builders.”

B&Q is to extend the concept to all stores in a 290m revamp – 3.5m per store – as the shop-within-shop format and more room displays showed “double-digit” increases in average basket size compared with similar stores. It was sales conversion, says Cairns, which proved an obstacle for B&Q.

“Three-quarters of consumers say they visit B&Q, but this is not converted to sales,” he says. “Light DIYers spend on average 1,000 a year on home improvements, but serious enthusiasts and builders fork out about 1,700. Clearly it is the latter type of consumer that B&Q should be targeting,” adds Cairns.

In research, while consumers say that rival Wickes is a “boring” store, it has the Ronseal factor: it does what is says on the tin. Despite Wickes’ apparent success in attracting serious builders and the male market, B&Q still has the greatest market share. But one analyst says: “Shareholders should be asking why its hold on the market is not greater than it is.”

George suggests that B&Q corporate strategy and advertising, currently handled by JWT, have hindered progress. “There were mixed advertising messages,” he says. “The campaigns about an older workforce were irrelevant, then there was too much focus on everyday low pricing. It needs to differentiate on something other than price, focusing on core competencies such as service and stock availability.”

He believes Wickes is faring well, but questions whether Focus, which has no specialism other than convenience, and Homebase, with its feminine offering, will prosper with their present strategy. George is adamant, however, that B&Q will.

He says consumers generally need just one kitchen or bathroom and that a plethora of outlets, from Magnet to Ikea, offer such products, meaning competition is fierce. But he thinks B&Q is strong enough to cut through: “B&Q did lose its way by not changing its store format for over ten years while it watched the market evolve and become more feminine. But it will never lose its position as the UK’s top DIY retailers. If it does more, using the resources it has effectively, it should be a market killer.”

Robert Ray is marketing director at the Newspaper Society Facts and figures For the six months to July 29, 2006, B&Q’s owner Kingfisher made a profit before tax, exceptional items and amortisation of 178.5m – better than analysts’ forecasts but down from 252.5m the previous year. Retail profit at B&Q crashed 42.7% to 82.6m, reflecting a 4.4% fall in sales to 2bn. Like-for-like sales fell 5.5%, but did show an improving trend: down 8% in the first quarter but only down 2.3% in the second quarter. B&Q is the biggest UK home improvement retailer, with 14.8% of the repair, maintenance and improvement market share (includes DIY and builders merchant sales). It has a total of 330 stores, 117 of which are “warehouse” format.