The 60-second ad airs for the first time on TV during the commercial break of the semi-final match between Manchester United and Manchester City live on Sky Sports 1 tomorrow (27 January).

The ad draws on the ongoing debate about whether Torres or Rooney is the better player and sees both Premier League players practising their shooting skills in a futuristic setting.

It was created by two creative advertising graduates of the University of Lincoln while on placement at Weiden+Kennedy and has already appeared on YouTube.

Nike’s reputation recently suffered when the brand was drawn into the ongoing scandal surrounding golfer Tiger Woods, who the sports brand sponsors. 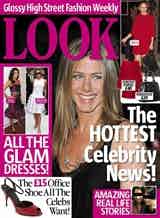 Look, the fashion magazine, is teaming up with fashion retailers including Zara, Next and Asos.com to launch the first high street fashion show during London Fashion Week.

Lynx, the men’s deodorant brand, is launching a new mobile campaign called “Get In There” aimed at making girls look, laugh and respond.

Facebook and The Nielsen Company have announced the UK launch of a new tool called Nielsen BrandLift, which will use the Facebook platform to measure the effectiveness of online brand advertising.