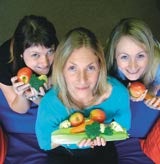 The Diary doesn’t particularly enjoy venturing north of the Watford Gap. An aversion to whippets, and a stomach easily turned by the smell of black pudding don’t help for a start.

However, the Diary can’t help wishing it had been in Oldham when ad agency Dynamix won an ISO Quality Award, purely to have seen the look on its staff’s faces when instead of the traditional champagne, they were given as much fruit and veg as they could carry to celebrate with.

Dynamix, it seems, used the award to launch a three-month free fruit and vegetable trial for its employees. Senior account manager Kirsty Mellor explains: “We hope that revitalising our diets will improve health and wellbeing. As part of the ISO Quality Award we’ve all made a commitment to quality in our professional lives, so we wanted our personal lives to follow suit.”

Staff have also been encouraged to make a small donation to charity each time they get an urge to eat crisps or chocolate. Good idea: if such a measure were to be carried out in the Marketing Week office, Third World debt would be wiped out in a matter of days.

Dynamix says the health drive is inspired by television shows such as Jamie’s School Dinners and You Are What You Eat. But taking a lead from the latter greatly concerns the Diary – it’s one thing when the boss slags off the metaphorical crap you produce at work, but when he starts inspecting the real thing, it’s time to hand in your notice.

Graphico has designed the website for ITV’s upcoming Celebrity Love Island reality show, which will be sponsored by Chevrolet. The site will feature interactive community-based content, including a voting area.

Marketers who are putting millions of pounds into e-mail marketing because they think it is completely trackable are in for a shock, online experts are warning. New consumer protection measures being adopted by internet services providers (ISPs) and e-mail software creators, including Microsoft, effectively block the ability to register when someone opens an e-mail and […]