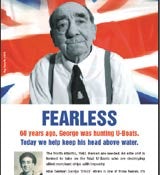 The Royal British Legion launches a new campaign this week, as the UK prepares to commemorate the 60th anniversary of the end of the Second World War. National press ads, created by Citigate Albert Frank (CAF), feature case studies of how the Legion helps Second World War veterans, in order to raise awareness of the charity’s work. The ads show the veterans as they were during the war and as they are 60 years on, in pictures commissioned specially for the campaign. This year will also see a series of commemorative events, including Victory in Europe Day in May, Victory against Japan Day in September, and a specially created Day of Commemoration in July. The Legion will run a fundraising campaign later in the year. Media buying is also through CAF.