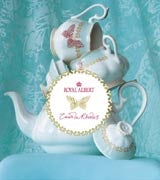 Royal Doulton Home, the luxury ceramics company that owns Minton, Royal Doulton and Royal Albert, has signed up with AffiliateFuture’s networks in the UK and US. There will be separate programmes for the two sites.

AffiliateFuture launched its US network less than a month ago (MW May 12).

Affiliate marketing companies act as middlemen. Merchants or advertisers supply them with online creative executions; affiliates – website owners – can then select which of those ads they want to run. The site owners receive commission for the number of visitors passed on to an advertiser’s site, leads generated or sales made, depending on the terms of the contract. Promotions can be short-term and tactical (particularly common in the travel sector); event-driven; or generic, ongoing site traffic generators.

Merchants signed up to AffiliateFuture’s UK network – one of the top three in the country – include confetti.- co.uk, John Lewis, Singapore Airlines and Virgin Atlantic. Site owners taking ads include Automart, Stone Island and World Vision.