Canada Post boss Moya Greene is to take the reins at the Royal Mail in July. First item in her in-tray? Removing the protective blanket of the public sector and ensuring that the organisation is in a fit state to attract the “injection of private capital” the coalition Government has said it wants. Oh, and all without incurring the wrath of a heavily-unionised workforce.

Quite a challenge, but one that she appears capable of meeting. Greene marshalled Canada Post through many of the same headwinds that have faced the Royal Mail – strong unions, increasing competition, declining mail volumes and the challenge of an ever more digital world – without, it seems, provoking anything approaching the same union ire as that of her predecessor, Adam Crozier. She also managed to steward the firm through five years of profitability.

Furthermore, she gained what might prove to be invaluable experience at a federal level in Canada, overseeing reform of the transport system and privatisation of the rail freight group, CN.

Greene seems to have also gained the backing of two primary stakeholders in the Communications Workers Union and the Direct Marketing Association too.

Dave Ward, the deputy general-secretary of the Communication Workers Union, stated that it was “good to see the appointment of a person with a public sector background”, while the DMA said it “welcomes any positive move towards creating a successful, vibrant Royal Mail”.

Collectively, it all amounts to quite a reference. The coalition government will have been buoyed by her obvious savvy, experience and bridge building skills as it prepares itself to do what previous administrations have failed to manage, and part-sell the Royal Mail.

The honeymoon will, I’m sure, continue through the first weeks of her stewardship but potential flashpoints do lie ahead.

Fears over the state of the Eurozone’s finances have left the markets very jittery and capital tight, so at present a share sale is a tougher sell. With this in mind, she will have to remain committed to modernisation and efficiency in any discussion with potential investors, who will no doubt be keener if inheriting a business 100% fit for private sector purpose.

And of course, the drive to modernise under Crozier was one of the catalysts that led postal strikes last year, which proved so damaging for the Royal Mail brand.

Greene will be under no illusions of the size of her task. If she manages to successfully manage all stakeholders, it might prove to be her biggest achievement yet. 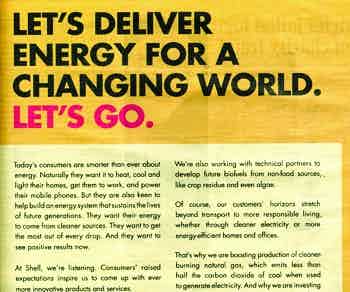 Environmental groups have attacked a national press campaign by Shell as ” ill-timed and “at best cynical and at worse downright dishonest”.

Pringles is launching a range of four flavours exclusive to Tesco stores. It is thought to be the first time the FMCG firm has created a bespoke range for a supermarket chain.

The Foreign and Commonwealth Office has appointed an external email service provider to handle global message distribution. Lateral Group is supplying its SmartCast platform as part of a fully-managed service including creative design and build as well as strategy.