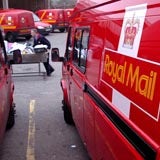 Under plans unveiled by mail regulator Postcomm, Royal Mail could charge up to 15% more. Proposals are subject to consultation.

Royal Mail last week called for a change to the current regulatory regime that it claims is “suffocating” attempts to increase revenue.

Under the current system, it claims, rivals are able to collect bulk mail from companies and then get Royal Mail to deliver over the so-called “final mile” for a discount price.

Royal Mail loses on average 2.5p on each item of bulk mail under the current regulatory rules, it says.

The company cited this and falling mail volumes for the £66m loss its letters division posted in the first six months of the year.

“With mail volumes falling rapidly and set to decline further as competition from electronic communications and rival postal operators intensifies, it’s essential the current regulatory constraints on Royal Mail are eased to allow it to compete fairly in the bulk business mail, and packet and parcel markets, where competition is extremely robust and growing,” she adds.