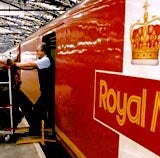 The Royal Mail has handed the bulk of its &£8m sales promotion work to Claydon Heeley Jones Mason and Triangle following a review of its roster.

Incumbent Yellow Submarine has been dropped while Tequila London has been taken on to do a “small amount of work on stamps” according to a Royal Mail spokesman.

Royal Mail’s ad account is held by Bates UK. Carat was recently reappointed to the media buying account. Parent company Consignia is due to unveil its yearly figures imminently and also to announce a fresh name change to Royal Mail.

The Diary loves photographs. Many a long hour on holiday has been spent with a telephoto lens on the hotel balcony, and the results are always eagerly awaited. You can imagine the joy, then, when a “Priority Service” envelope – with free film – was dropped onto the Diary’s desk. Was this a forgotten film? […]

“Clutter,” I hear you mutter. Ads are everywhere and consumers are becoming disillusioned. Big brands are getting more and more frustrated at receiving very little return for the millions they splash out every year on advertising. This might be about to change. While digging through some discarded memos in a bin near Granada Television’s offices, […]

Britvic Soft Drinks will launch its Pepsi Twist brand in the UK next month. Pop Idol finalist Gareth Gates will promote the Pepsi-Cola variant. The move follows rival Coca-Cola Great Britain’s launch of Diet Coke with Lemon in the UK this month (MW April 4). Pepsi Twist will be the first launch of a Pepsi […]