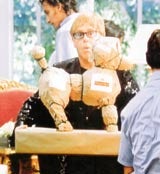 It emerged earlier this year that Roche had been left without a job after a restructure was called by Royal Mail’s marketing director Alex Batchelor.

However, a spokesman said at the time that Roche was still with the company and he was said to be in the running to replace Gordon Steele as sales and marketing director of the Post Office. But it is now understood that Roche will leave at the end of this week. He has effectively been replaced by Antony Miller, although Miller takes up the newly created role of head of media development.

A Royal Mail spokesman confirms Roche’s departure and points out that the media development team under Miller has doubled in size following the restructure.

The other major change is the merger of the government, financial, multi-channel retail and publishing units to form the large market development sector. Former head of the financial unit Leonora Corden will run&nbsp;the&nbsp;new&nbsp;division. Tim Rivett retains responsibility for the SME and consumer sector.

The spokesman says/ “The new structure will ensure greater focus on media proposition delivery now that we are in a fully competitive environment.”

However, Royal&nbsp;Mail’s&nbsp;brand marketing team will not be affected by the reorganisation.